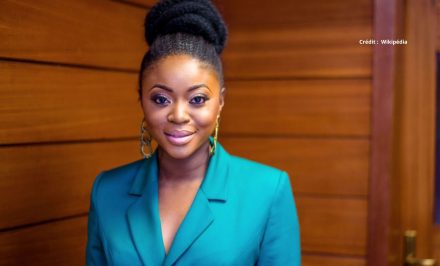 Ghanaian entrepreneur, speaker, investor, Afua Osei supports African businesswomen, through She Leads Africa. A platform that she co-founded with Nigerian Yasmin Belo – Osagie in 2014 and which connects over 700,000 women across Africa and in the diaspora.

At 36 years old, Afua Osei is now one of the youngest inspiring African women in the world. In 2014, Forbes Magazine ranked her as one of the 20 youngest women in power in the world. A reputation that the Ghanaian owes to her commitment to supporting talented businesswomen in one of the fastest growing economies in the world, Africa.

Born, raised and educated in the US, she decided to connect with Africa during her college years. While pursuing a Master’s degree in Business Administration at the University of Chicago, she spent a summer internship in Lagos, Nigeria, working for a mobile technology company. This experience with Africa prompted her to co-found « She leads Africa » in 2014. “One day I asked a colleague: if you want professional development, career guidance, where do you go? She replied that they didn’t have such a structure. So I started a small business that would focus on women and help them be more successful professionally,” she tells University of Chicago Magazine.

The ambition of the platform is to showcase African women entrepreneurs other than by linking them to the informal sector, but by highlighting these African businesswomen who aspire to create global start-ups.

She Leads Africa also aims to identify, train and invest in talented women entrepreneurs and businesswomen in Africa and the diaspora, giving women access to career opportunities and information. The platform offers mentoring, courses, funding to women, as well as networking opportunities. In 2016, it rang the closing bell on the New York Stock Exchange.

She also holds a master’s degree in public policy from the Harris School of Public Policy at the University of Chicago and was a management consultant for McKinsey & Company from 2013 to 2016. She also worked in the office of former US First Lady Michelle Obama. Since 2021, she has been a member of the Board of Trustees of Allegheny College and Imara Roose, which is a mentoring program for girls of African descent.

Because of her commitment to African women entrepreneurs, Afua Osei was ranked in 2017 as one of Quartz’s 30 Innovators. In 2020, she won the Harris School Rising Star Award from the University of Chicago School of Public Policy.