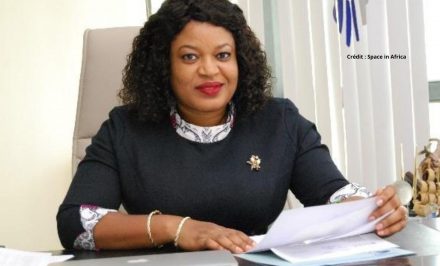 Abimbola Alale is a Nigerian satellite technology expert, one of the few women in the world to run a satellite agency. Since 2016, she has been the CEO of the Nigerian Communications Satellite Limited, the Nigerian agency that provides satellite services in the country, Africa and even around the world.

From a very early age, Abimbola developed a passion for space and astronauts. This love led her to the International Space University in Strasbourg, France, where she earned a degree in space studies and an MBA in « space management », despite several obstacles. “One day, my supervisor asked me if there was an astronaut program in my country.  I told him that we had just started a program. Then he told me that I should consider doing something more beneficial for me and my people. I thought about it and said I would specialise in space business to introduce the benefits of space to Nigerians and bridge the digital divide we were experiencing at the time,”she tells the BBC.

She subsequently obtained a PhD in Peace, Security and Strategic Studies from Nasarawa State University, as well as a certificate in Innovation Technology and Leadership from the Massachusetts Institute of Technology in Boston, USA and a Certificate in Global Financial Public Relations and Marketing from London Management School.

She started her career at the National Space Research and Development Agency in Nigeria as Deputy Project Manager. She was part of the team that built and launched sub-Saharan Africa’s first communications satellite, NigComSat-1, in May 2007.

She later joined the Nigerian Communications Satellite Limited where she first worked as Executive Director, Marketing before being appointed CEO in 2016 with a vision to provide seamless connectivity as well as communication solutions and make the company the leading satellite communication solutions provider in Nigeria and Africa. From 2018 to 2019, she became a member of the Space Generation Council (SGAC) Advisory Board. In 2019, she was reappointed as CEO of Nigerian Communications Satellite Limited for a 4-year term.

In her 20-year career, Abimbola has contributed to a number of Nigeria’s priority projects, such as NigComSat-1, NigComSat-1R and the establishment of a National Direct Digital Transmission Centre. She faced several obstacles, related, in particular to the lack of awareness of the benefits of space and satellites in Africa. « My biggest obstacle in this journey of my career has been distractions from people who do not understand what space or satellite does for them. They don’t understand the benefit ; they don’t see it ; they don’t feel it. They do not understand that most of the things that they actually enjoy come or are related to space technology »,she tells the BBC.

Despite all these obstacles, the Nigerian woman was able to succeed in her career and is now one of the few female CEOs of a satellite company in the world.

In 2021, Reset Global People listed her in its 100 female CEOs in Africa ranking.