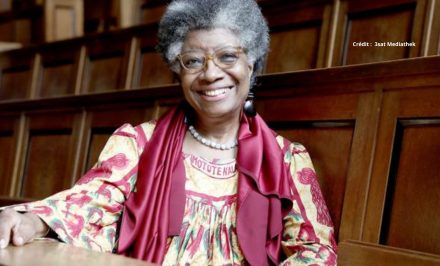 Marilyn Douala Bell is an economist and museum curator, very involved in the conservation of art objects in Cameroon. She is co-founder of the contemporary art centre “Doual’art”, which focuses on art and urban research.

Because of her special history, as the granddaughter of Rudolf Douala Manga Bell, who was the leader of one of the important resistance movements against the German settlers in Cameroon, Marilyn Douala Bell devotes part of her work to honouring the historical role played by her grandfather and to preserving the memory of Cameroon. Since 2014, she has been working on commemorative projects on German colonial history in Cameroon.

Long before entering the artistic world, this economist, who graduated in development economics from the University of Paris-Nanterre, worked for several NGOs and institutions.  From 1988 to 1993, she was a delegate, then executive director for the Central African region of the Association for the Promotion of African Community Initiatives. From 1994 onwards, she worked as an international expert in urban and rural development, namely for the World Bank and the European Commission.

Promoter of art and the urban in Cameroon

In parallel to her career as an economist, she founded in 1991 with her late husband, Didier Schaub, an art historian, the Doual’art Contemporary Art Centre, which she presides to this day. The institution is dedicated to supporting artists who are passionate about urban issues, whether they are visual artists, architects or designers. It is also committed to the future of African museums and the restitution of cultural objects from colonial contexts.

Among its activities, Doual’art organises exhibitions of artists of different nationalities, artistic projects and events in the public space of the city of Douala, and creative workshops led by artists in residence in Douala. In 2007, the Centre launched the Salon Urbain de Douala (SUD), an event organised every three years, during which artworks by different artists are displayed in the city. In 2016, she participated as an African expert in the Goethe Institute Johannesburg Conference on the Design of the Humboldt Forum.

In 2019, she was the co-curator of the Goethe Institute’s “Burden of Memory” project in Yaoundé, in which 100 artists from 6 African countries each recounted the German colonial period in Africa in their own way.

She is also the initiator of the exhibition project “Kamerunstaat” which tours schools in Cameroon, accompanied by an educational program. She also curated the exhibition “Hey Hamburg! Do you know the Douala Manga Bell” which opened in April 2022 and which runs until 31 December 2022 at the Museum of Hamburg am Rothenbaum Kulturen und Künste der Welt (MARKK) in Germany.