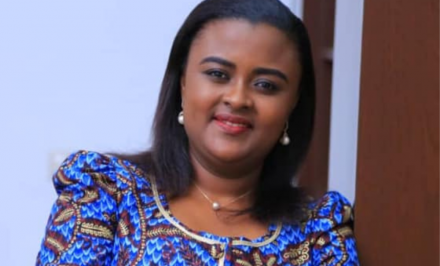 Francine Muyumba is, at 35, one of the two youngest senators in the Democratic Republic of Congo (DRC) and the chair of the Commission for External Relations in the Congolese parliament. Before that, she was from 2014 to 2019 president of the Pan-African Youth Union (PYU), the official body of the African Union (AU) in charge of youth.

After five years at the head of the UPJ, Francine Muyumba was elected in 2019 as senator for the province of Haut Katanga in the Congolese Senate. At the same time, the young politician was appointed to chair the Foreign Relations Commission in the Upper House of the Congolese Parliament with the mission of managing the country’s foreign policy issues and examining bills for the ratification of international treaties.

It was as president of the UPJ that Francine Muyumba became known, especially in Africa. During her tenure, she carried out several actions in favour of African youth. In particular, she contributed to the launch of the African Youth Development Fund with the aim of promoting youth entrepreneurship and employment in Africa. In addition, the UPJ lobbied several countries to create national funds dedicated to youth entrepreneurship in Africa (Senegal, DRC…).

In 2019, after her election to the Congolese Senate, she resigned from her position as president of the UPJ to devote herself fully to her political career. Today, the young senator’s ambition is to set up a favourable framework for an inclusive and sustainable economic growth in Congo, to improve the living conditions of vulnerable populations and to make Congolese diplomacy shine.

Francine Muyumba holds a Bachelor of Arts in Communication from the University of Namibia in 2011 and a Bachelor of Arts in Public International Law from the Protestant University of Congo in 2018. She was president of the Student Representative Council of the University of Namibia and an activist in the World Federation of Democratic Youth. Returning to Congo in 2012 after her studies, she was president of the board of directors of the National Federation of Young Entrepreneurs of Congo. She was also the bilingual secretary of the Congolese government’s peace talks with Ugandan rebels in Kampala.