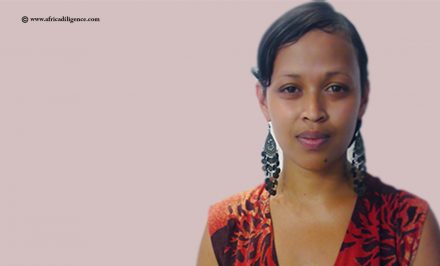 Lalie Rabeharison is a passionate Malagasy executive producer and photographer. She devotes her work to attract more international film producers to Africa and to promote tourism on the continent through cinema. In 2016, she founded « African Fixer Guild », a professional organization that promotes film tourism in Africa.

Lalie immigrated to France at the age of 6. At a very young age, she gave birth. She also dropped out from her film studies at the university in Paris because she could no longer « absorb cinematography as a theoretical subject », she says. Then, she turned to movies which became her new source of knowledge and learning. In the cinemas of Paris, where she spent her time, she became familiar with filmmakers such as Takashi Miike, Lee Chang Dong, David Lynch, Raymond Rajaonarivelo… who became her new masters. Through movies, she gained knowledge about art, politics, history, economy, cultures from all over the world and built her critical mind. From that experience, she also understood that being an office manager or a clerk was not her professional ambition. She wanted to bring her contribution to serve noble causes.“I never dreamt of writing a thesis. I never dreamt of being employee of the month. I did none of this. I have faith that real accomplishments matter more than awards”, she tells us.

Then, she became a freelance writer and photographer, writing articles on innovative social initiatives. She got in the field of production as a production assistant. She was noticed with her writing and was in charge of reading and selecting interesting scenarios for the producers. At the same time, she conducted research on tourism induced by cinema in Africa and discovered the experiences of Morocco, Tunisia, South Africa, Kenya, Nigeria. From there, she was convinced of the need to innovate in the film industry in Africa and decided to go back to Madagascar. Following a memorable trip to Tanzania, she became a line producer and a place branding marketer for film destinations in Africa.

Promoting tourism in Africa through cinema

In 2016, she founded African Fixer Guild, with the slogan “filming in Africa needs African expertise”. The organization promotes local film professionals and famous filming locations in Africa, such as the treasure of different architectures in Tanzania, outstanding locations for sports TV shows in Madagascar. “I always felt concerned that decades of a common cliché prevented to know Africa as an array of premium film destinations where movies can be fixed in a safe and smooth way, with longtime film professionals, like any film production standard in the world”, she says.

Through the organization, she gives advice on process and sourcing for international film production related to Africa. She provides European, American and even African producers with accurate information on destinations and a thorough risk evaluation so that they can measure the feasibility and cost of their production. The local team of the organization takes care of all formalities and customs practices to obtain the permit (s) to film from state, religious and traditional authorities. She has supported documentary and film directors in different African countries: Tanzania, Cameroon, Senegal, Sierra Leone, Kenya…

In addition, the organization has contributed to give global visibility to African film directors and producers, given that it connects international producers with African producers and directors with a good knowledge of their respective countries.

Lalie Rabeharison also founded “Drone Pilot Africa” in 2020, a drone pilot services unit with licensed drone pilots across the continent that the organization recommends for aerial film shootings in Africa. She was also the photographer of several first ladies in Africa, including the former Central African President, Catherine Samba Panza.