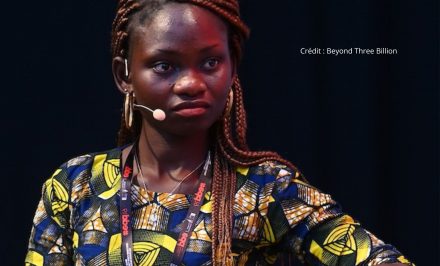 Tatiana Houndjo is a computer scientist committed to promoting the inclusion of girls and women in ICT and digital education in Benin. As the founder and director of the African Youth Empowerment for Future Initiative, she advocates for the integration of digital skills into her country’s education system. In 2019, she was selected by the European Commission as one of the 15 young leaders to take part in the European Development Days.

Tatiana Houndjo graduated with a degree in Computer Science, Management and Administration of Computer Networks from the National School of Applied Economics and Management (ENEAM) in 2016. Committed to the inclusion of girls and women in ICT, she launched in 2017 with a friend “Queens of STEM”. An initiative highlighting women working in science and technology. The aim being to inspire other women. From 2016 to 2020, she was a mentor and organizer of ‘Women Techmakers’ in Abomey, Benin, a Google program for Women in Technology that provides visibility, community and resources for women in technology to stimulate innovation and their participation in this field.

In addition to her commitment to including girls and women in ICT, she also works to promote digital education in her country. She currently leads Beyond Three Billion (B3B) in Benin, an international, research-based, youth-led non-profit organization working for the sustainable inclusion of youth in governance. She is also a « Young digital expert » for the AU-EU Youth Cooperation Hub, launched in October 2018, aiming to foster bilateralism between young people in Africa and Europe. Since 2021, she is also an ambassador of the “One Young World”, which is the global forum of young leaders bringing together the brightest young talents from every country and sector, working to accelerate social impact.

In 2019, the European Commission chose her as one of 15 young leaders participating in the European Development Days (EDD), a platform aimed at proposing innovative solutions to the world’s most pressing challenges. That same year, she also participated in the “Girl’s Day Initiative” by the “Deutsche Gesellschaft für Internationale Zusammenarbeit” (GIZ). She then took part in the “Crossroads Emerging Leaders Program 2019/Entrepreneurship and Entrepreneurial Studies” at Harvard Business School. She was selected as one of 80 emerging leaders out of thousands of applications to participate.

As a computer scientist, Tatiana Houndjo has worked with several institutions, including the Agency for the Safety of Air Navigation in Africa and Madagascar (ASECNA), the General Budget Directorate of the Ministry of Economy and Finance of Benin, the Deutsche Gesellschaft für Internationale Zusammenarbeit (GIZ), COMTEL Technologies…