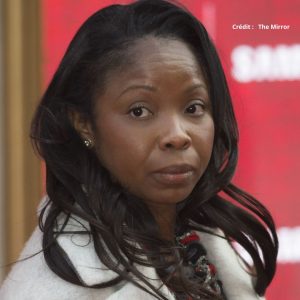 Director of « Community Engagement » for the Prince of Wales and the Duchess of Cornwall, Nigerian Eva Omaghomi has been working with the British Royal Family for the past 15 years. A cultural anthropologist by training, she managed the communications strategy for the official visits of King Charles III, while he was still Prince of Wales, and of the Duchess of Cornwall as well as the Duke of Sussex (Prince Harry) in more than 50 countries for several years.

From 2019 to 2021, she was ‘Senior Strategic Adviser for the Commonwealth’ at The Prince’s Trust Group, a charity NGO established by the current King Charles III in 1976 that helps vulnerable young people take control of their lives. The NGO works with unemployed young people aged 11 to 30 and those at risk of exclusion from school.

In 2021, she was appointed Director of Community Engagement at The Household of TRH, with the mission of helping to improve relations between the British Royal Family and minorities. A role she played with the former Prince Charles until his coronation as King of England, and which she continues with Prince William and Kate, the new Prince of Wales and Duchess of Cornwall until further notice.

Eva Omaghomi is also known for being part of the award-winning Clarence House Communications team that managed the media plans for William and Kate’s wedding in 2011.

She has also been a Pastor at the Christian Church since 2010 and is a trustee of the Big Kid Foundation, an NGO that fights youth violence. In 2017, she was made a Lieutenant of the Royal Victorian Order, an award given to those who work for the Royal Family. In 2021, she received the « Kindness in Leadership Award ».

The Magazine « New African Woman Magazine » also cited her as one of the 15 personalities to watch.