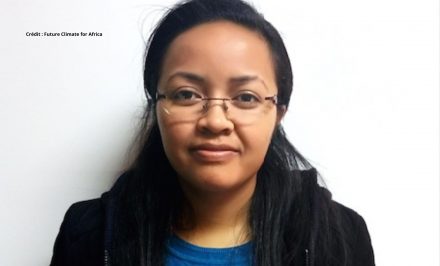 Rondrotiana Barimalala is a Malagasy specialist in oceanography. Winner of the Young Scientist Prize from developing countries awarded by the International Centre for Theoretical Physics (ICTP), she co-directed the 6th report of the Intergovernmental Panel on Climate Change (IPCC) in 2021.

As an oceanographer, Rondrotiana Barimalala considers her field of expertise to be essential for Africa, allowing to predict, in particular the effects of climate change to which Africa is extremely vulnerable, and to reflect on measures to mitigate these effects.

From physics and chemistry to oceanography, geophysics and seismology, Rondrotiana Barimalala has followed a rich academic career in several universities and research centres around the world. After her baccalaureate, she joined the physics and chemistry department of the Faculty of Sciences of the University of Antananarivo in Madagascar. In 2006, she obtained a DEA in seismology from the Institute and Observatory of Geophysics of Antananarivo. In 2011, she got a PhD in physical oceanography as part of a program between the University of Trieste in Italy, the Georgia Institute of Technology (USA) and the International Center for Theoretical Physics (ICTP). She conducted, in particular, her doctoral research on the role of the Indian Ocean in climate change in Central and Southern Africa.

In 2017, she joined the University of Cape Town in South Africa where she was part of a research team in the « Future Climate for Africa Program ». In 2020, she was awarded a funding under the Futures Leaders-African Independent Research (FLAIR) Program supported by the African Academy of Sciences, the Royal Society and the Global Challenges Research Fund of the United Kingdom, through which she carried out a project to analyse the oceanic processes of tropical cyclones formation and intensification in the Mozambique Channel.

In 2021, she contributed to the 6th IPCC (Intergovernmental Panel on Climate Change) report entitled “Climate change 2021: the basis of physical sciences”. A report that found, among other things, that in a world that warms by 2°C, Madagascar will increasingly face challenges such as extreme heat, agricultural and ecological drought and that its livelihoods will suffer. Today, her ambition is to raise awareness of the importance of oceanographic research in her country, in particular by collaborating with the national meteorological service and universities in Madagascar.

Currently, Rondrotiana Barimalala is a postdoctoral researcher in the Department of Oceanography at the University of Cape Town in South Africa, where she works on climate variability, modelling and change, air-sea interaction and the African climate.