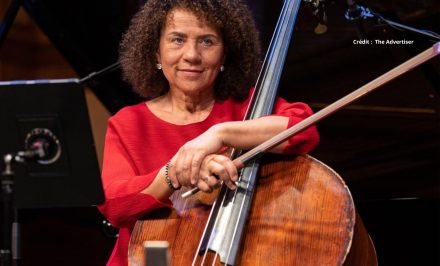 Chinyere Adah Nwanoku is a double bassist of Nigerian origin. For over 30 years, she has been the principal double bassist of the « Orchestra of the Age of Enlightenment » which she cofounded. In 2015, she founded “Chineke! Orchestra”, a professional orchestra that brings together junior musicians of mostly African, Asian descent…. to encourage diversity in orchestras across Europe.

Chinyere Adah Nwanoku is a musician who has become known in the UK, not only as a double bass player, an instrument often considered ‘male’, but also as one of the few musicians of African descent to play in major orchestras in the UK and Europe.

Born to a Nigerian father and an Irish mother in the early 1960s, she took an interest in music from an early age. At 7, she began piano music lessons.

Alongside her love of music, she also had a passion for athletics. At 8, she was spotted on a running track by a sprint coach who decided to train her with the ambition of making her an Olympic champion. For more than 10 years she trained intensively, but at 17 her dream was shattered due to a knee injury. She was forced to give up athletics and then devoted herself fully to music.

At 18 she then specialised in bass music and studied at the Royal Academy of Music, encouraged by her headmistress and high school music teacher. She went on to become an international classical performer, playing as a soloist with the world’s leading orchestras. She then worked as principal double bassist in several major orchestras, including the Orchestra of the Age of Enlightenment which she cofounded, the London Mozart Players, the Revolutionary and Romantic Orchestra ….

She also presented several programs on BBC Radio, including “In Search of the Black Mozart” in 2015 where she spotlit the careers of the 18th century greatest composers of African descent.

For several years, she was one of the few musicians from minorities playing classical music. Aiming at promoting diversity in orchestras across Europe, she founded in 2015 “Chineke! Orchestra”, one of the first orchestras in Europe to include a majority of musicians from minorities: African, Asian… In 2015, the orchestra made up of 62 musicians of 31 different nationalities, performed for the first time at the Queen Elizabeth Hall.

In 2017, the orchestra signed its first recording with Signum label.

In 2019, the group became the first winner of the Royal Philharmonic society’s Gamechanger Award given to people and groups who have innovated in classical music.