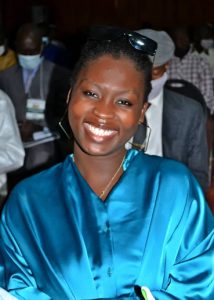 Adizatou Hamza Maïga, 21, is already thinking as a “pan-Africanist.” The young Malian student in “Building engineering, public works, and topography” at Ibn Tofail University in Kenitra (Morocco) uses her pen to promote Africa’s development through its youth. She is the author of the book “Lettre continue d’Amadou Hampâté Bâ,” an essay published in 2021.

It’s hard to put Adizatou in a box. In literature, science and business, she has her say. But beyond her many hats, one passion marks out her work: her love for Africa, which she does not hide.

After receiving a scholarship, she arrived in Morocco in October 2017. Following preparatory classes in technological and industrial sciences, she earned a science and technology bachelor’s degree in “Water and Environmental Engineering” at the Faculty of Science and Technology (FST) of Mohammedia. Then, she pursued a master’s degree in “building engineering, public works and topography” at the Faculty of Sciences of Ibn Tofail University in Kenitra (Morocco), which she will complete in 2023. But apart from her studies, she also devotes herself to her lifelong passion: writing. Because for her, science and literature match perfectly.

Adizatou became passionate about books in her childhood. At a young age, she started writing a few poems here and a bit of text there, until the day, she considered writing a book. She started with a novel, but being fond of Pan-Africanist writers, she finally chose to write a book on Africa. This is how her essay « Lettre continue d’Amadou Hampâté Bâ » came to be, published by L’iroko house of publications in 2021. A book in which she addresses African youth and which, according to her, echoes the messages of the famous Malian ethnologist and writer Amadou Hampâté Bâ in his book “Open letter to youth” (1985). “When I started writing the book, it was certainly intended for African youth, but when I realized that the ideas I was developing in it were somewhat similar to those of Amadou Hampâté Bâ, I decided to give the title of “Lettre continue d’Amadou Hampâté Bâ to the book”, she explains.

For the young Malian, her book serves as a reminder to the present generations of the messages of their forefathers. “It is of the utmost urgency to remind African youth of the wise messages and words of their forefathers and great men, the leaders of independence. In his letter to the youth, Amadou Hampâté Bâ predicted what is happening now. The present generations must understand that they must not uproot themselves, but rather change their dead leaves, as the Malian writer so aptly put it,” she said. In this sense, she also calls in her book for “the revival of independent Africa”, because for her, “everything has to be redone, to get out of colonial Africa, to build an Africa that is economically, politically, and intellectually emancipated and also in all areas that will ensure the survival of the continent, at a pivotal moment in history when Africa is experiencing the immigration of its populations to the West”. « By 2050, African youth will constitute 35% of the world’s youth. Today, young Africans must think about what they need to improve in terms of agriculture through ICTs and technologies, renewable energies, to promote food self-sufficiency,” she explains. And African leaders, she adds, must, for their part, “look at the problems from the front and not from the back” and provide concrete solutions to the challenges facing the African continent.

Promoting the processing of Tiger Nut

Student, a writer, but also an entrepreneur. In July 2021, Adizatou launched Souch Industry, a tiger nut processing company, a tuber grown in West Africa. Having found tiger nut in Morocco with difficulty, in its raw state and at an expensive price, she decided to bring it home and transform it into several easily consumable derivatives, such as juices, flour, madeleines, and snacks. She insists that this product is very rich in virtues. “Tiger nut has a high nutritional value in the human body. It can fill the daily nutritional intake of humans if consumed daily. It contains calcium, magnesium, iron, phosphorus, vitamin C, and vitamin E, “she explains. It also regulates blood sugar in people with diabetes, fights hypertension, stomach aches, and is full of many other therapeutic virtues, she adds.

From now on, the young entrepreneur tries to promote tiger nut in Morocco, which is little known to its population. Moroccans don’t know about tiger nut, but when they taste it for the first time, they instantly love it. Recently, there was a graduation at my university. I brought back madeleines and tiger nut juice that people really appreciated, “she says.

Beyond promoting the health benefits of tiger nut, the Malian’s long-term goal with her project is to make it a significant source of income for her country, which exports to Spain, as well as to increase the income of women, who are the primary growers of this tuber in Mali.

Adizatou has dreams. One day, she hopes to turn Souch Industry into a large industry present in several countries on the continent and to create a holding company to gather all her activities. She is currently interning at a geotechnical and civil engineering firm in Mohammedia, and her long-term goal is to become a “works manager,” a site manager…And above all, to continue writing to promote the development and culture of Africa.