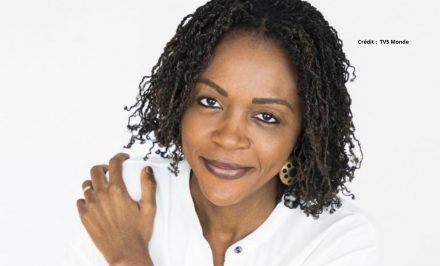 Osvalde Lewat is a multi-faceted Cameroonian artist. She is film Director, art photographer, writer, and the author of several award-winning works. In 2022, l’Académie Française awarded her the « Prize for the influence of French language and literature ».

Osvalde Lewat has made of camera, writing her tools of artistic expression. Through her films, photographs and books – a universe that she discovered in her childhood thanks to her mother-, she campaigns for several causes.

She is a graduate of Sciences Po and the Higher School of Sciences and Techniques of Information and communication (ESSTIC) in Cameroon. She began her professional career in journalism by joining the editorial staff of the daily Cameroon Tribune. She was soon disillusioned and decided to turn instead to the image, as a film director and photographer. She succeeded in her new path. Her films have been broadcast on more than 70 television channels worldwide.

After leaving the newspaper, she went on training courses in Paris, in Montreal at the National Institute of Image and Sound (INIS) where she directed in 2000 her first short film “Calumet de l’espoir” with the Native Americans. Three years later, she directed  another documentary “The forgotten man”, which is a portrait of a prisoner sentenced to 4 years in prison and who rather spent 33 years in jails in Cameroon. In 2005, in Kinshasa, she made a documentary on the situation of women raped during the war in the Democratic Republic of Cameroon (DRC). Entitled “Love during the war”, the documentary points at the State’s lethargy in face of the abuses suffered by women in the country.

In 2007, she directed her feature documentary “Black Business” which tells the story of a special unit of the Cameroonian police responsible for putting an end to illegal acts, banditry and which itself applies justice, by executing people, without first establishing the facts and which caused thousands of victims. The film was well received by critics. It won several awards and distinctions, namely the Grand Prix for Documentary in Verona, the Best Documentary and Best Image Prize at the “Vues d’Afrique” Festival in Montreal, Canada, as well as the 3rd Documentary Award at FESPACO in Burkina Faso in 2009.

In addition to film direction, Osvalde Lewat is also an art photographer. She has exhibited her work in Africa, Europe and America. In particular, she exhibited her series “Night Colours” in New York, Paris, Marseille and Brussels …. In 2014, she also presented her series “Margins” in Kinshasa in the DRC. In 2015, she illustrated the collective work “Congo night colour” with her photographs.

In 2021, she published her first book “Les Aquatiques” with Escales, which was much appreciated by the public and the critics and that won the Pan-African Grand Prize for Literature, as well as the Ahmadou Kourouma Award in 2022.

Osvalde Lewat has won other awards, including the prestigious Peabody Award in the United States and the « Etoile de la Scam » for the Best documentary and news report of the year in France.