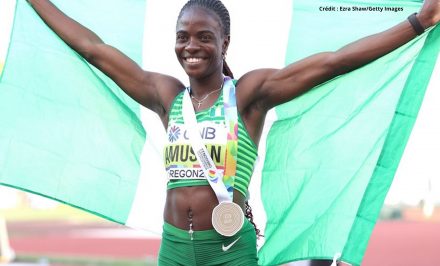 For the past few days, Oluwatobiloba Ayomide Amusan has entered history of world athletics. In July 2022, the Nigerian became World Champion in Athletics. It is the first time an athlete from Nigeria wins a gold medal in world athletics.

On July 24, 2022, during the Eugene World Championships in the United States, Tobi Amusan beat Jamaican Britany Anderson and the Puerto Rican Olympic champion Jasmine Camano Quinn, thus winning the gold medal. With a time of “12s 06”, she broke her last record achieved the same day during the semi-finals with a time of “12s 12”.

Born in Nigeria in 1997, Tobi Amusan is currently studying at the University of Texas at El Paso in the United States thanks to a scholarship she received in 2016. The 25-year-old athlete whose both parents are teachers spent her secondary education at Our Lady of the Apostles High School in Ijebu Ode in Ogun State. At the same time, she developed a passion for sport.

She began in the sports world, as a football player and was particularly passionate about running. This is how she once competed in an event with coached athletes in Ogun State and won the competition. She then took a liking to athletics.

Gradually, her career as an athlete started to take shape. She first won local competitions, in her state, then at the national level. In 2013, she began to make herself known in Nigeria, after winning the African Youth Championships in Warri.

She then participated in African competitions, notably at the 2014 African Youth Games in Botswana where she won the silver medal in the 4x100m relay. In 2015, she took part in the African Games in Brazzaville where she achieved an African Junior record in the 100m hurdles in 13s11 and won the gold medal in 13s 15. Having moved to the US for her studies in 2016, she competed in the 2017 NCAA Track and Field Championships in Eugene, which pits the best college teams in the US against each other. She set a new personal best time of 12s57. In 2018, she won two gold medals, at the African Championships in Asaba, Nigeria, in the 100m hurdles and 4x100m. During her last participations in the All Africa Games in 2019 in Rabat, Morocco and in 2022 in Saint Pierre, Mauritius, she won the gold medal.

In 2016, when she was 19 years old, she started to take part in international competitions. She participated in the World Junior Championships in Poland where she was ranked 5th. She then competed at the 2018 Commonwealth Games where she won gold in the 100m hurdles with a score of 12s68, as well as bronze in the 4x100m. In 2019, she participated in the World Championships in Doha, Qatar. She was ranked 4th in the 100m hurdles, as well as at the Olympic Games in Tokyo, Japan in 2021. At the Diamond League in 2021, she won the gold medal in the 100m hurdles.

In 2022, during the World Championships in Eugene, USA, she made history by becoming the first Nigerian athlete, both male and female, to win a gold medal.