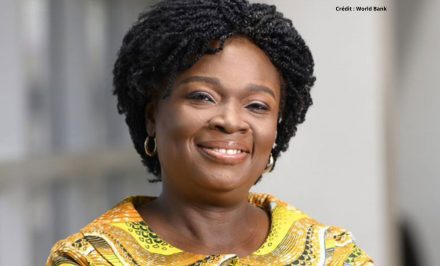 Victoria Kwakwa is a Ghanaian economist who has a track record of more than 30 years of experience in the World bank, namely in economic and development experience across Africa and Asia. Last June, she was appointed Vice-president for Eastern and Southern Africa for World Bank.

As the newsly appointed vice-president of Eastern and Southern Africa, the Ghanaian development economist who took office last july will lead the bank’s engagements in 26 African countries and oversee $58 billion porfolio of 313 operations. « Her priorities include promoting private sector, jobs and economic transformation, building human capital, strengthening climate resilience, agricultural productivity and food security, and improving access to critical insfrastructure. Reducing the drivers of fragility and conflict, promoting gender equality and regional integration across all the areas of work »,says the World Bank on its website.

Victoria Kwakwa spent her entire career within the World Bank. Soon after getting her PhD in Economics, international trade & finance /monetary theory and policy from Queen’s university in Canada in 1988, she joined in 1989 the institution as « Young professional ». Later on, in 2003, she became the « Lead Economist » for the World Bank in Nigeria for three years.

In 2007, the ghanaian economist became the World Bank country manager in Rwanda where she spent two years, before moving to Vietnam in 2009 as the country manager for seven years.

Victoria Kwakwa has a strong mastery of issues related to debt and macroeconomic resilience, reforms for economic competitiveness and growth and fiscal decentralization. She has also worked extensively on « developping issues, namely rural development, infrastructure, services provision and financing, climate resilience and mitigation, developing human capital and leveraging the potential of urbanization for development », says the World Bank on its website.

Prior to her recent appointment, she was the World Bank Vice-President, in East Asia and Pacific, from 2016 to 2021. Then, she became in September 2021 for less than one year the vice-president for strategic corporate initiatives of the World Bank. Recently, she was appointed to replace the Egyptian economist Hafez Ghanem who retired in june 2022.