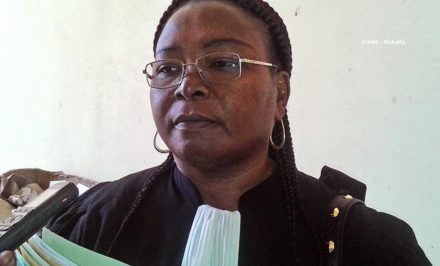 For more than three decades, Delphine Kemneloum Djiraibe has been advocating in Chad for a fairer society that respects the rights of Chadians. She is the founding member and president of the Chadian Association for the Promotion and Defence of Human Rights (ATPDH). In 2004, she was awarded the Robert Kennedy Prize and the Franco-German Human Rights Award in 2020 for her commitment to human rights in her country.

In Chad, Delphine Kemneloum Djiraibe is one of the best known civil society activists. She graduated in 1989 with a degree in private law from the Marien Ngouabi University in Congo-Brazzaville and in 2002 with a master’s degree in international human rights and environmental law from the University of Washington Law School. Returning to Chad in 1990 after her studies, she noticed that the population of her country was subject to famine and extreme poverty and was victim of abuses committed by the political regime ruling at the time. Therefore, she founded the Chadian Association for the Promotion and Defence of Human Rights, which works for unity, peace, justice, respect for human dignity and economic development in Chad. At the same time, she also created the Association of Women Jurists of Chad (AFJT), which aims to defend the rights of women and children in the country.

After her master’s degree in law in 2002, she joined a law firm as an intern before founding the Public Interest Law Center in 2006, whose goal is to facilitate access to justice for Chadians. The center offers, in particular to the poor, legal and judicial assistance, thus enabling them to obtain justice. In this context, it accompanies several complainants, residents of the Chad-Cameroon gas pipeline operating area, who have been dispossessed of their land for the realization of the project and who are demanding justice. She also protests against the management of gas pipeline revenues by the authorities, calling on them to further support the development of the locality.

In 2002, she contributed to the creation of the follow-up committee to the call for peace and reconciliation.

In 2004, she received the Robert F. Kennedy Human Rights Award for courageous human rights defenders around the world.

In 2019, she was awarded the Franco-German Award for Human Rights and the Rule of Law for her commitment to the preservation of human rights in Chad. In 2009, Jeune Afrique ranked her among the 100 most important changemakers in Africa.