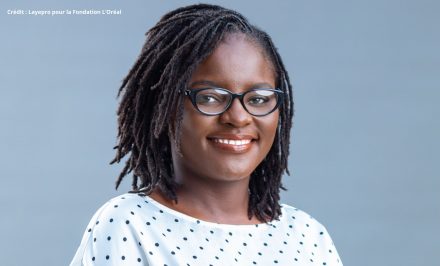 Fatou Joof is a Gambian biology researcher whose work explore new strategies to eradicate malaria. She is the winner of the 2019 L’Oréal-UNESCO Young Talent Africa Award for Women in Science.

Through her research, Fatou Joof is trying to find new ways to eliminate malaria, by studying the mutation of red blood cells. It was based on her personal experience that she decided to make malaria the focus of her research. When she was three years old, she caught the most severe form of malaria and narrowly escaped death. An experience that marked her enormously, even though she was young at the time.

Having always wanted to be a doctor, it is rather in biology that she did her higher studies. In 2007, she began her undergraduate training in biology at Mohamed V University in Rabat in Morocco. After obtaining her bachelor’s degree in 2011, she returned to The Gambia where she joined the unit of the Medical Research Council as a scientific officer. In 2013, she flew to England and joined the University of Manchester where she obtained a master’s degree in molecular parasitology in 2014.

In 2017, she moved to the Keneba station in The Gambia and, some time after, began her doctoral studies at the medical research council unit in The Gambia, which she decided to dedicate to the study of genetic mutations in red blood cells related to malaria.

In her doctoral thesis, which she defended in 2021, she studies how these genetic mutations can protect against malaria, focusing in particular on the expression of proteins, the function of red blood cells and the pathogenesis of malaria.

In 2019, she won the Young Talent Prize from the L’Oréal-Unesco Foundation for Women and Science. An award aiming at rewarding her for her research and financing her scientific work.

Since 2021, Fatou Joof has been carrying out her postdoctoral research at Seattle Children’s Hospital in the United States, notably at the Center for Global Infectious Diseases.