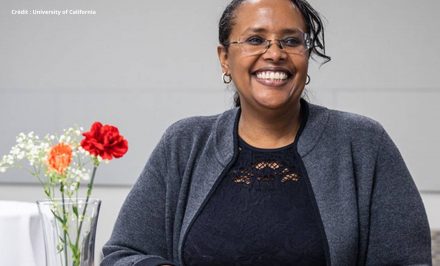 Since May, 2022, Asmeret Asefaw Berhe has been managing the Office of science of the US department of Energy. The Eritrean-born American biogeochimist, who teaches soil science at the University of California, focuses her research on studying how soil can regulate the earth’s climate.

From an early age, Asmeret showed a great love for books. She was then nicknamed by her friends « The Professor ». Years later, the Eritrean has become a Professor of soil science at the University of California and a seasoned biogeochimist.

Born in Eritrea, Asmeret spent a tough childhood. She witnessed Eritrea’s decades long war of independence from Ethiopia. Her father was arrested twice and had to leave the country for a certain period of time.

In 1991, the year of Eritrea’s independence, she interrupted her university studies to teach english in her former high school due to the shortage of teachers following independence. In 1996, she graduated with a Bachelor in soil and water conservation at the University of Asmara in Eritrea. Then, she pursued a Master of science in Political Ecology in 2000 at Michigan University in the US. In 2006, she obtained her PhD from the University of California at Berkeley in « Environmental science, policy and management ». Then, she continued with a postdoctoral training at the same university.

Research focusing on how soil can regulate the earth’s climate

As a researcher, she focuses her work on soil biogeochemistry investigating the effects of physical perturbations in the environment on soil organic matter (SOM) dynamics. « The overall goal of my work is better integration of biogeochemical and geomorphological approaches to derive improved representation of mechanisms that regulate organic matter (OM) persistence in the soil system », she says on her Linkedin page.

Asmeret spent her entire professional career at the university of California. She began in 2009 as assistant professor, then associate professor for almost 5 years. In 2019, she became Professor of soil biogeochemistry and Falasco Chair in earth sciences. In 2020, she was appointed interim Dean of graduation division. She held that position until her designation to run the Office of Science of the US department of Energy in May, 2022. It is an institution overseeing US national energy policy and managing the research and development of nuclear power and nuclear weapons in the US. The office of science supports the fundamental scientific research on energy.

An advocate for more diversity in science

Asmaret has contributed to the Millenium Ecosystem Assement, which evaluated the consequences of climate change on human beings. A report that was awarded the Zayed International Prize for the environment in 2005. She also won the National Science Foundation Career Award.

Asmeret also advocates for more diversity in science, namely for more women in science, because for her « The better the quality of science, and the more relevant science becomes to society ». Asmaret is part of the Earth Science Women’s network, the Association for Women geoscientists and the American Geophysical Union which have a partnership which tackles the issue of sexual harassment in the earth, space and environmental issues.