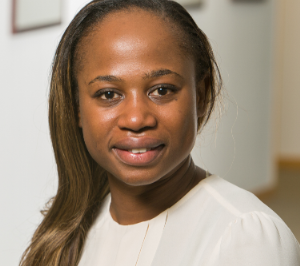 Ingrid Etoke is a marketing expert who has worked for several years with major international pharmaceutical groups to launch and develop their activities in Africa. Today, the Cameroonian is a senior program officer-health investor at Bill & Melinda Gates Foundation. In 2020, she was included in the Top 100 personalities who contribute to the economic development of Africa, a ranking established by the Choiseul Institute.

With a double academic background, first in biochemistry and biotechnology, with a master’s degree obtained at the University of Lille in 2004, and secondly, a specialisation in marketing, with a master’s degree from the Institut d’Administration des Entreprises (IAE) of the University School of Management in Lille in 2005, Ingrid Etoke harmoniously combines all her strings.

She started her career at Aventis Pharma in 2004 as assistant business team leader marketing. In 2005, she was Junior Product Manager at Schering-Plough, and Project Manager (pharmaceutical marketing) at Universal Medica from 2006 to 2007. In 2008, she joined one of the world’s largest pharmaceutical companies, Norvatis Pharma, as co-marketing coordinator for French-speaking Africa and Indian Ocean. She managed the firm’s portfolio in both areas for over a year. In July 2009, she joined Sanofi first as Senior Marketing Coordinator for Central Africa for one year and then as Marketing Manager for Central Africa from 2010 to 2012. In 3 years, she increased the group’s sales by 32%.

In 2013, her former employer, Novartis, hired her again and assigned her to Sandoz GmBH, where she spent over a year.  But in 2014, she left the group, to join GlaxoSmithKline Pharma GmBH as the company’s general manager for Central Africa. For more than three years, she contributed, among other things, to creating new distribution channels for products in the DRC and Cameroon for the British group. In 2017, she flew to London where she held the position of Director of Health Agents for Africa and Asia Pacific at the same company’s headquarters for over a year.

While in England, she was hired by Innovative Vector Control (IVCC), an NGO developing new vector control tools to eradicate malaria. In particular, she helped set up marketing strategies to democratise in Africa a new type of mosquito net impregnated with not one, but two insecticides aimed at increasing mosquito resistance.

Since September 2021, she has been Senior Program Officer – Health Investor at Bill & Melinda Gates Foundation where she manages, among other things, health grant investments, develops and implements health investment strategies. She is also a board member of the NGO Unitaid and the Liverpool School of Tropical Medicine.

In 2020, the Choiseul Institute included her for the 5th time in its ranking of the 100 economic leaders of tomorrow in Africa, notably in the “Decade of Health” category, which recognises the top 10 personalities who are making a difference in the health sector.