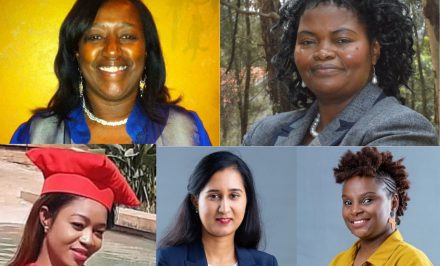 On Thursday 23 June, L’Oréal-UNESCO Foundation rewarded several women scientists, including five African laureates for 2020 – 2022. Agnès Binagwaho, a professor of paediatrics from Rwanda and the Kenyan chemist Catherine Ngila were honoured for the excellence of their scientific research. The Senegalese Ndèye Maty Ndiaye, the Mauritian Nowsheen Goonoo and the Zimbabwean Georgina Nyawo were distinguished in the “International Rising Talents” category. Here is a look at the careers of these five exceptional women scientists.

Agnès Binagwaho, the paediatrician who helped improve access to care for the most vulnerable in Rwanda

Professor of Paediatrics and Vice-Chancellor of the University of Global Health Equity in Rwanda, Agnès Binagwaho has contributed enormously to improving access to care for the most vulnerable communities in her country, in Africa and beyond. She graduated in general medicine in 1984 and obtained a master’s degree in paediatrics from the University of Brest in France in 1993. She began her career in Belgium before returning to Rwanda a few years after the genocide. Faced with a health system weakened by war, she contributed, in particular, to its reconstruction, with a focus on supporting the most vulnerable, including children affected by the conflict and suffering from HIV. Having worn several hats, including Executive Secretary of the National AIDS Commission in Rwanda (2002-2008), Permanent Secretary of the Ministry of Health (2008-2011) and Minister of Health from 2011 to 2016, she contributed particularly to improving access to health services for people suffering from HIV, malaria and tuberculosis. She is also interested in non-communicable diseases such as cancer, diabetes, mental illness… Since 2017, she has been Vice-Chancellor of the University of Global Health Equity, which she co-founded. An initiative to train a generation of health professionals who will deliver more equitable and quality health services for all. She is also a lecturer in global health at Harvard University.

Jane Catherine Ngila is a Kenyan chemist who conducts research on the purification of polluted water using nanotechnology to facilitate access to drinking water in Africa. Holder of a PhD in Analytical and Environmental Chemistry from the University of New South Wales in Australia in 1996, she worked as a lecturer in Botswana from 1998 to 2006, and subsequently at the University of KwaZulu-Natal in South Africa from 2006 to 2011. In 2011, she was appointed Professor of Applied Chemistry at the University of Johannesburg. There she worked, among other things, on the use of nanotechnology for water purification. After several research projects, she developed a number of water detection and filtering processes based on nanotechnology. Executive Director of the African Academy of Sciences, based in Nairobi, she is also committed to ‘feminising’ science laboratories by encouraging African girls and young women to pursue scientific careers.

In 2016, she won the African Union’s Nkwame Nkrumah Award for Scientific Excellence. She is a 2021 laureate of L’Oréal-Unesco Women in Science Program.

Ndèye Maty Ndiaye, the Senegalese researcher who wants to produce electricity from biomass

Ndèye Maty Ndiaye is a Senegalese researcher specialising in physics. She holds a PhD from South Africa and is a post-doctoral fellow at the laboratory of quantum photonics, energy and nanofabrication at Cheikh Anta Diop University (UCAD). Her work aims, in particular, to valorise the biomass of local agricultural products to store electrical energy, which will be used to solve the problem of access to energy in developing countries. She is also very committed to promoting scientific careers among young women.

She is a 2021 laureate of the L’Oréal-Unesco Women in Science Program in the “International Rising talents” category.

A specialist in medical and health sciences, neurosciences, Nowsheen Goonoo is a Mauritian researcher who has carried out work for the treatment of diabetic foot ulcers. Holder of a PhD obtained in 2015 from the University of Mauritius and the University of Memphis in the USA, she conducts postdoctoral research at the Center for Biomedical and Biomaterials Research (CBBR) at the University of Mauritius. She works, in particular, on the development of materials with high added value using local resources such as seaweed, to treat burns, ulcers and bone defects. She is also very committed to promoting science education among secondary school girls in her country. In 2020, she obtained L’Oréal-Unesco Foundation’s “Rising Talents” International Award for Women in Science.

Georgina Nyawo is a Zimbabwean scientist specialising in biochemistry, microbiology, bacteriology and epidemiology. Her work focuses on the treatment of tuberculosis. She is particularly interested in the microbiome (complete bacterial communities in the human body). Her work consists of evaluating the microbiome in patients with tuberculosis. She holds a PhD in Molecular Biology from Stellenbosch University, South Africa, which she will complete in 2021. She was awarded L’Oréal-Unesco International Rising Talents Award for Women in Science in 2020.