Cameroon: Rolande Kammogne, a success story in the media 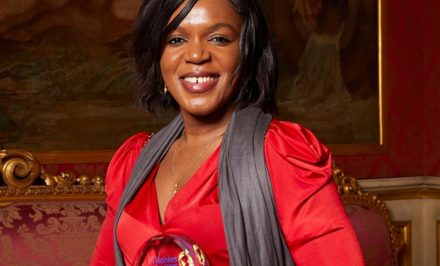 Rolande Kammogne is the producer of one of the biggest music shows in Africa, “The Voice Afrique Francophone”, adapted from “The Voice”. The Cameroonian entrepreneur is also the founding director of the pan-African TV channel, VoxAfrica.

Rolande Kammogne is an engineer in mathematics, statistics and management systems who decided to make a career in the media and audiovisual sector rather than in banking, as her basic training would have suggested.

She graduated in mathematics from Fustel des Coulanges High School in Cameroon. She then joined Columbia University in the United States, where she obtained a degree in engineering in maths, statistics and management systems in 2004. In parallel to her scientific studies, she also studied cinema.  She wrote a thesis on the need for the creation of a media that would connect Afro-descendant people in the world and which was published in the university journal.

After graduation, she got a job at Wall Street, one of the most prestigious banks in the United States, but turned it down, preferring instead to take an internship at Killer Films, an independent film production company based in New York. During this internship, she had the opportunity to work alongside Christine Vauchon, the founder of the production company.

In 2006, she joined a team of analysts, which enabled her to work on the business plan of the pan-African channel. In 2007, she decided to move to London and officially launched Vox Africa, a bilingual pan-African channel broadcasting in French and English. In January 2008, during the African Cup of Nations in Ghana, VoxAfrica was launched on the internet. Five months later, it broadcast its first signal in Africa visible on satellite. Today, the channel is available in French-speaking and English-speaking Africa, Europe, the United States and on all major TV distribution networks.

In 2015, the channel obtained the African franchise of the hit show “The Voice”. In 2016, VoxAfrica organized the first season of “The Voice Africa” in West and Central Africa. The Voice Africa is the only franchise of “The Voice” in the world with 17 countries. Since then, it has been a great success. For the 2nd session, the event recorded 10 million viewers in Cameroon and 9 million viewers in Côte d’Ivoire, audiences comparable to those of AfCON.

In 2018, she won the Prize for former students of French high schools abroad awarded by the Agency for French Education Abroad (AEFE).