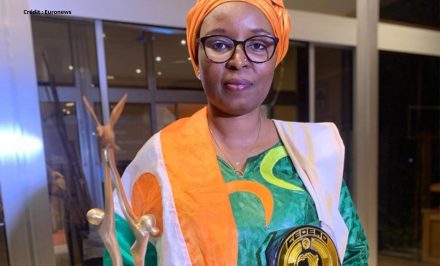 Aicha Macky is a documentary director and producer who uses cinema as a weapon to combat the problems that plague Nigerien and African society. Her documentary film “The fruitless tree”, produced in 2016 and dealing with the taboo issue of infertility in Niger, won more than 70 international awards.

Aicha Macky doesn’t produce films for fun. Her documentaries are a way for her to tackle taboo issues that plague Nigerien society. With a degree in Sociology from the Faculty of Letters and Human Sciences in Niamey and a Master’s degree in audiovisual from the IFTCO in Niamey, the Nigerien woman skilfully handles her two hats. Described as a “sociorealist”, a combination of sociologist and director, Aicha Macky uses cinema as a channel to deal with social issues, allowing her to address all social categories.

While still a student, she started producing films. Her first short film was made in 2011 under the title “Me and my thinness”. A film that she produced as part of her internship at the African Documentary Film Forum and which deals with the perception of the thin body and the link that society makes with Aids. Through this first documentary film, which was successful, the director reflected on the female body in Senegal and Niger and the question of women’s emancipation. In 2013, she produced a second film, « Knowing how to make the bed », in which she  deals with the lack of dialogue between mothers and daughters in Niger on sexual education. The 26-minute documentary film was presented in 2015 at the Angers Film Festival.

In 2021, she produced her 2nd feature documentary “Zinder”, the result of 8 years of work, including 2 years of negotiation to get the agreement of the gang members. The 82-minute documentary deals with the phenomenon of gangs causing trouble in her hometown, Zinder. It takes a closer look at the daily life of young people in search of their bearings, divided between gangs, family, resourcefulness, and the desire to escape the cycle of violence in which they are immersed.

In addition to being a director, Aicha Macky is a teacher at the Institute for Training in Information and Communication Techniques in Niamey. She works to make cinema careers accessible to women. She also trains young people in CVE (How to counter violent extremism).