Haweya Mohamed, the entrepreneur who connects African and European Tech 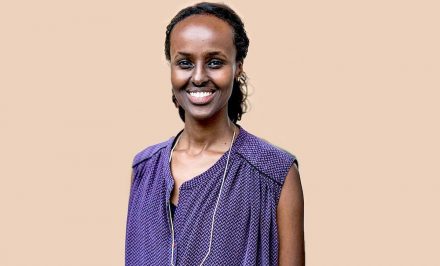 Connecting Tech start-ups in Africa and Europe, or giving visibility to African entrepreneurs in cosmetics and fashion… Haweya Mohamed is committed to innovation in Africa. The Somali and Djiboutian heads Afrobytes, a company she co-founded in 2015 and The Colors, co-founded in 2019.

Haweya Mohamed is now an entrepreneur, working to provide development opportunities for African innovators, whether in tech, cosmetics or fashion. Nothing to do with her childhood passion: becoming a teacher. This ambition led her, after her economic baccalaureate, to obtain a master’s degree in foreign literature at the Diderot University in 2001.But by a coincidence, it was in the world of broadcasting that Haweya landed instead and had a career for years, before co-founding Afrobytes and The Colors.

In 2001, she entered the world of entertainment. She joined Endemol Shine Group, a Dutch TV production company, as a production assistant for shows such as Star Academy, Loft Story. In 2005, she joined Channel 4, a British television network, where she was in charge of selling the broadcasting rights of famous series of the time, such as “Desperate Housewives”, to channels like M6. In 2006, she joined RTL as executive assistant to the CEO for 5 years. In 2011, she became head of communications for the channel, with the ultimate mission of making it the number one radio station in France.

She then spent two years with Alain Afflelou, a French optician chain, from 2011 to 2013, as Chief of staff. She was then spotted in 2014 by the pan-African private investment fund, Al Mada, which recruited her to manage its international communication. During this experience, she discovered the enormous potential for innovation in Africa, particularly in Morocco and Senegal.

Afrobytes was born after meeting Youssef Ammim, head of the digital design agency, The Big Youth, who later became her partner. After a trip to East Africa where they met the tech ecosystems, particularly in Kenya, to better know their needs, they found that the expectations were the same: need for funds, solid partnerships, international visibility…

In 2015, they decided to create a marketplace whose vocation is to be a bridge between innovators from the African continent and international tech players. Afrobytes aims to be an accelerator for start-ups. It offers African start-ups exposure, the possibility to connect with investors and the opportunity to grow. It offers European start-ups, companies and investors looking for growth and investment opportunities, original ways to enter the African market. It is also a conference organizer on Tech and a laboratory that imagines solutions that will create a better link between the African diaspora and the continent in all its dimensions: investment, family and friends. Afrobytes has joined Station F, one of the largest start-up campuses in France.

The Colors: giving more visibility to African fashion and cosmetics

In 2019, she co-founded The Colors. The objective being to highlight entrepreneurs of African descent in the field of cosmetics and fashion, after having noticed a lack of diversity in cosmetics and fashion products and the absence of support for African entrepreneurs in fashion and cosmetics. The project focuses on two programs, namely “La Fabrique” for cosmetics and “l’Atelier” for fashion. These two programs work on brands, on the engagement of communities with brands, the mastery of digital channels to facilitate the sales process and customer relations.

In addition to fashion and cosmetics, The Colors addresses the challenge of lack of opportunities for African farmers.

In 2018, Haweya Mohamed was ranked by Entrepreneur Magazine as one of the 50 most daring entrepreneurs. In the same year, she was listed among the most creative people in business by Fast Company, an American business magazine. In 2018, Forbes also ranked her among the 92 women to watch who are disrupting tech in France.