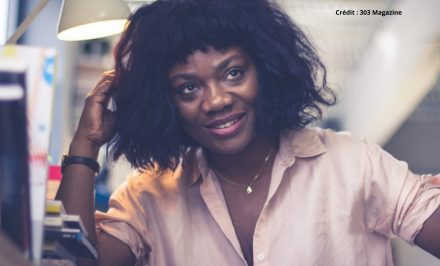 Artist and illustrator, Nicholle Kobi promotes Afro-descendant women through drawing. The Congolese artist highlights on glossy paper the faces of beautiful African, Afro-Caribbean, Afro-American women… under different hats: entrepreneur, wife, mother… to put them forward and make them more visible. She shares her creations on her Instagram account, which has almost 140 thousand subscribers.

Nicholle Kobi has been passionate about drawing since her childhood. At a very young age, she reproduced the faces of women from the women’s magazine Amina. One thing leading to another, she ended up studying art history and plastic arts, and continued to draw the faces of women of African descent. Despite her enormous artistic talent, she switched to the banking sector where she spent 10 years, discouraged by her professors who judged her creations not to be very sellable, because they highlighted a minority.

Despite all these years in the banking world, the Congolese woman did not lose her passion for drawing. When she was on sick leave for a year during her pregnancy, she was particularly concerned by the sexualised and unflattering image of “black” women in the media. She decided to pick up her pencils again, to put forward, through drawings, the real woman of African descent: the one who is strong, determined, accomplished, intellectual, brave, fulfilled…

Inspired and very creative, she drew 4 to 6 images per day of glamorous and elegant “black” women in everyday scenes, which she shared on her Instagram account. Her work was immediately noticed and appreciated on the web and her account was widely followed by thousands of followers. 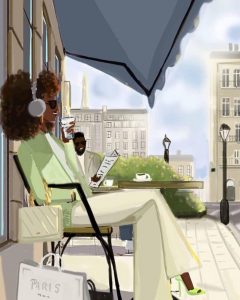 A commitment through drawing

For Nicholle Kobi, drawing is a commitment to women and to Afro-descendant society. Through her sketches, she highlights gender equality in African, Afro-American and Afro-Caribbean couples, through the sharing of daily tasks and the care of children. A way of deconstructing the clichés about the “black” woman, who is generally portrayed as a woman who does everything in her home. The illustrator also highlights the black woman who assumes her identity, who proudly wears her hair frizzy, curly, braided… An image that contradicts the clichés of Afro women wearing hair extensions, wigs…

The Congolese woman presented her numerous drawings at exhibitions in several countries, including Canada, Brazil, Kenya, Ghana, South Africa, Nigeria and the USA. In July and August, she will tour Africa as part of the “Art & Dinner Nicholle Kobi” event. She will exhibit her work in Dakar (Senegal), Abidjan (Ivory Coast), Kinshasa (DRC), Johannesburg (South Africa).

Nicholle Kobi started out with an Instagram page of her drawings. Today, the artist has developed the brand “Kobi”. She makes clothes, postcards, paintings, functional everyday objects (bugs, kits…) with prints of Afro-descendant women.

She is also the author of “Les Noires Parisiennes”, a book illustrated by herself and published by “Fleuve Edition” in 2021.

In 2020, Nicholle Kobi launched a podcast series “The Noire Parisian Podcast”. She is also a partner in “Essence Magazine”, a monthly American magazine for African-American women.

Discover her illustrations on https://www.instagram.com/nichollekobi/