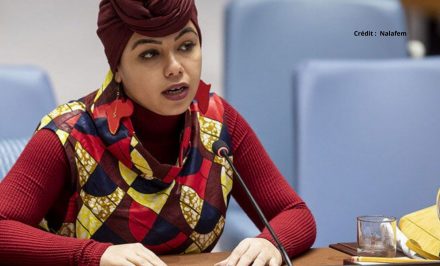 Activist, speaker, diplomat, Aya Chebbi advocates for African youth and the cause of women under several hats. A former youth envoy of the African Union, the Tunisian woman is the recipient of several awards and distinctions. She was listed in the Forbes ranking of the 50 most influential women in 2020.

Aya Chebbi has built her career around her commitment to African youth. Whether she is an activist, a speaker, a diplomat or an entrepreneur, the Tunisian woman keeps her ultimate goal in mind: to promote the rights of African youth. In just a few years, she has become a key figure in the defence of the rights of young Africans, to the point of appearing in various prestigious rankings, such as the list of the 100 most influential Africans in New African magazine.

After graduating in International Relations from the Institute of Human Sciences in Tunis in 2011, she started her commitment to youth as a blogger. Through the blog “Proudly Tunisian” that she created in 2010, she expressed herself on various political topics related to Tunisia. As a political blogger, she became one of the prominent voices of the 2011 Tunisian revolution. Together with two other African women bloggers, she launched the « Voice of Women Initiative » as a safe platform for young African women to express themselves. In 2012, she also founded the Africa Youth Movement, a pan-African initiative for the development, participation and leadership of African youth.

In 2018, after being Special Envoy of Tunisian Youth to the 32nd African Union Summit, she was appointed by the Chairperson of the African Union Commission as Special Envoy of Youth to the African Union. She was the first to be appointed to this position. As such, she met and advocated for African youth with more than 30 Heads of State and more than 190 leaders, calling on them to adopt national policies to increase the appointment of young people to positions of responsibility.
She has also mobilized for the “Silencing Guns in Africa” campaign, which is becoming the African Union’s largest youth campaign and the main platform for the Youth, Peace and Security agenda, one of the main recommendations of which is the adoption by the AU Peace and Security Council of the first continental framework on youth, peace and security.

She initiated other projects, including Afresist, which is a think tank that trains the next generation of pan-African peacemakers.

During the Covid 19 pandemic in 2020, she has also mobilised several young Africans, resulting in the drafting of the Africa Youth Policy Leader.

As a women’s rights activist, she mobilised several young women, which resulted in a groundbreaking political document, the ‘Manifesto of Young African Women’. This later gave rise to the Nawala Feminist Collective, which brings together 17 African feminists around the Africa Agenda at national and international level.

Due to her various commitments, in 2018 she won the « Pan-African Humanitarian Award » in the category of Youth and Gender advocacy.
In 2019, she received the Bill and Melinda Gates Foundation’s Campaigner Award.