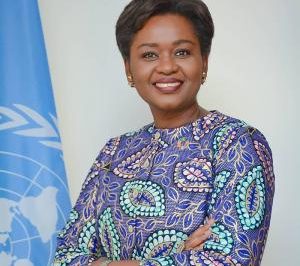 Trained in finance, Oulimata Sarr is the current Regional Director of UN Women, which covers 24 countries in West and Central Africa. The Senegalese is also a member of the Women’s Investment Club, an investment fund that finances women entrepreneurs in Senegal.

Since 2019, Oulimata Sarr has been coordinating the activities of UN Women in 24 African countries. It was after a rich and successful career in the sector of finance, that the Senegalese took the reins of the organization in West and Central Africa two years ago.

Holder of a Bachelor’s degree in finance from (HEC) business school in Montreal in 1992 and an MBA in finance from Bedfordshire University in England in 2002, she started her career in 1993 as a Senior Auditor within the firm Ernst & Young in Senegal. Then, in 1996, she joined the airline Interair South Africa where she spent 8 years as Chief Financial officer. In 2005, she joined the International Finance Corporation (IFC), which is part of the World Bank group. She worked, notably in South Africa, Burundi, Kenya.

It was while working at the IFC that she discovered her vocation for the promotion of women’s rights. « It all started when I was working at the IFC and our Director asked me to lead the women’s network. I realised that we, women in development institutions, have a mandate to represent all African women when decisions impacting their lives are taken », she told Intelligences.info.

Her commitment to the cause of women within the IFC led her to join UN Women in 2016 as Regional Advisor on Women’s Economic Empowerment for West and Central Africa. Two years later, she became Deputy Regional Director for West and Central Africa; then Acting Director in March 2019. Since December 2019, she has been coordinating UN Women’s activities in 24 countries in Africa.

Thanks to her background in finance, she has been working in particular towards women’s leadership and entrepreneurship on the continent, gender budgeting for African governments…

With her team, she helps governments adopt international standards for achieving gender equality and women’s empowerment in collaboration with NGOs and donors.

Passionate about gender, she has contributed to several initiatives in favor of women. She was a member of the Jury for the Cartier Women’s initiative Awards which is an annual international entrepreneurship program dedicated to women. She was also part of the Global Mentor for Women Businesses of the Cherie Blair Foundation for Women, which aims to contribute to the financial empowerment of women. She is also a member of the Women’s Investment Club, an investment fund that provides financing to women entrepreneurs in Senegal.