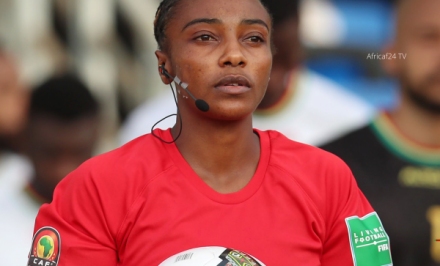 Salima Mukansanga is a Rwandan football referee. At 35 years old, she has just made the history of the African Cup of Nations as the first woman central referee of this competition. On the occasion of the 2022 African Cup of Nations, which is currently taking place in Cameroon, she refereed the Guinea-Zimbabwe match in Yaoundé on January 18th.

Although several women have been refereeing continental and even world women’s competitions for years, or have been assistant referees at the African Cup of Nations (AfCON), none had previously officiated as a central referee at the African Cup of Nations. On January 18th, Salima Mukansanga made the history of the prestigious continental football competition as a central referee alongside three other female assistant referees, namely the Cameroonian Carine Atezambong, the Moroccan Bouchra Karboubi and Fatiha Jermouni. An honor that she owes to her experience and skills.

Passionate about sports since her childhood, particularly basketball, she ended up choosing football given the difficulties of access to basketball facilities. After getting her baccalaureate, she trained in as a referee and obtained her certificate in arbitration in 2008, at the same time as she pursued her training in nursing and midwifery at the University of Gitwe (Rwanda).

In 2015, she refereed the African Games in Congo Brazzaville, notably the opening match between Nigeria and Tanzania and the semi-final between Ghana and Côte d’Ivoire. She was also selected in 2016 as one of the 47 referees chosen to officiate during the Women’s AfCON organised in Cameroon. She refereed, in particular, the final match between Cameroon and Nigeria, which was finally won by Nigeria with a score of 1-0.

From 2018, she started officiating at world competitions. In particular, she refereed at the Women’s Under-17 World Cup in Uruguay. The following year, she was chosen to referee at the Women’s World Cup in France. She officiated the match between Sweden and Thailand.