Burundi: Lydia Nsekera, the pioneer who paved the way for women leaders at FIFA 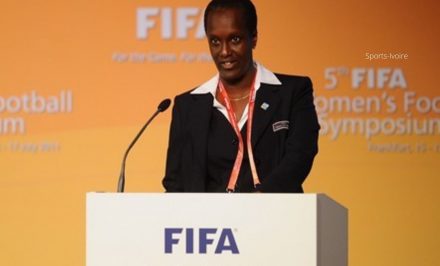 Lydia Nsekera is a Burundian football manager. After joining the International Olympic Committee in 2009, she became in 2012 the first female member of the Executive Committee of the International Federation of Association Football (FIFA) since its creation in 1904, paving the way for several women to join the institution.

Lydia Nsekera has never played football, but she has spent her entire career in that field. She initiated the first women’s football teams in Burundi and is today one of the leading figures in the promotion of women’s football in Africa and around the world.

Daughter of a football club owner, namely the “Burundi Sport Dynamic”, she was immersed in football all her childhood. At the age of six, she accompanied her father to the stadium and was fascinated by football. As time went by, she turned to basketball and athletics, especially the high jump, which she practiced for several years. But she ended up returning to her first love, football.

Holder of a degree in economics and administrative sciences obtained at the University of Burundi in 1992, she worked as an internal auditor for Brasseries et Limonaderie du Burundi from 1999 to 2001. From 2002, she managed the family company Garage Tanganyika Cars following the death of her husband. Alongside her professional career, she also involved in sports. In the 1990s, she created women’s football teams in Bujumbura, the capital of Burundi, and launched the country’s first women’s football championship. She also worked for women to referee men’s football matches.

In 2004, she was appointed President of the Burundi Football Federation (BFF), becoming the first woman to hold this position in the country and even in Africa. A position she held until 2013. In parallel to her functions within the BFF, she played other roles. She was notably a member of the “Women and Sport” Commission of the National Olympic Committee (NOC) of Burundi from 2001 to 2006. She was also a member of the “Women’s Football Commission of the Confederation of African Football” from 2006 to 2012. In 2008, she was appointed as a member of the organizing committee of the Olympic Football Tournaments in Beijing, China, as well as a member of the organizing committee of the 2008 FIFA World Cup in Chile. In 2009, she was elected to the International Olympic Committee (IOC). Within this committee, she held several positions, including that of President of the Women and Sport Commission from 2014 to 2015 and President of the Women in Sport Commission from 2015.

In 2012, she made history in world football. She was co-opted, then elected in 2013 by the FIFA Congress as a member of the FIFA Executive Committee. She thus became the first woman to access this committee since the existence of FIFA in 1904. Within the organization, she headed the Committee for “Women’s Football” and the “FIFA Women’s World Cup” from 2013 to 2016. In 2017, she was appointed vice-chair of the FIFA Development Committee. She is also a member of the Board of Directors of the FIFA Foundation. In 2019, she was appointed coordinator of the Games of the 34th Olympiad in Los Angeles 2028.

Committed for decades to the development of women’s football, Lydia Nsekera is determined to change mentalities in Africa and contribute to the emergence of football by women on the continent. In 2009, she was awarded the IOC Women and Sport Trophy and in 2012, she was appointed to the Order of Friendship of Peoples at the Officer class of the Republic of Burundi.