Egypt: Shymaa Enany, a microbiologist who advocates for women’s leadership in science 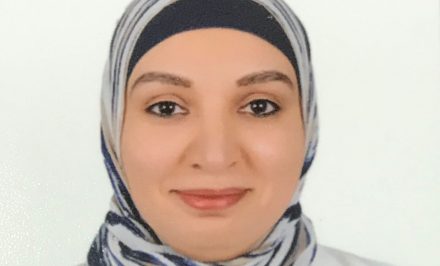 At the Faculty of Pharmacy of the Suez Canal University in Egypt, where she teaches microbiology, Shymaa Enany has devoted herself passionately for years to the study of microorganisms, bacteria… Ambassador of the Next Einstein Forum in Egypt, the Egyptian microbiologist was awarded the “Early Career Scientist” prize by the International Science Council in October 2021. She also advocates for the promotion of women’s leadership in science in Africa.

Shymaa Enany is an Egyptian microbiologist with a rich and prolific career. Daughter of a microbiology professor, she became passionate about this field of science during her childhood. “Since high school, I liked microbiology so much. On top of that, my father was also a professor of microbiology. He was my idol. I always wanted to be like him,” she tells Africa Women Experts.

With her baccalaureate in hand, she naturally joined the “microbiology” department of the Faculty of Pharmacy of the Suez Canal University in 2001, where she obtained a Bachelor’s degree in “pharmacy and pharmaceutical sciences”. Four years later, she obtained a Master’s degree in microbiology which she decided to complete with a PhD. In 2006, she made the choice to pursue her doctoral studies abroad and flew to Japan where she joined the School of Medical and Dental Sciences of Niigata University. In 2010, she got a PhD in microbiology and immunology. An international experience that she consolidated with a postdoctoral training from 2011 to 2013 at the Department of Structural Pathology of Niigata University. Later on, she flew to the United States and joined in 2014 the Division of Pulmonary and Critical Care Medicine at the Veterans Affairs San Diego Healthcare System as a research biologist. She worked simultaneously as a visiting professor in the Division of Infectious Diseases at the University of California San Diego School of Medicine.

One year later, back in Japan, she worked as an associate professor at the Department of Bacteriology, Infectious Disease Control and International Medicine of Nigaata University.

In 2016, she returned to Egypt where she has been working since as an Associate Professor in the Department of “Microbiology and Immunology” at the Faculty of Pharmacy, Suez Canal University.

A researcher working to improve health in Africa

As a microbiologist, Shymaa specializes in the study of bacteria. She was one of the first Arab scientists to apply microbial techniques known as “microbial proteomics techniques using mass spectrometry” for bacterial analysis, she says. This implies analyzing the bacteria that spread in a specific community, studying some of their proteins, their genes, and their metabolities to understand the correlation between the bacteria, the disease and the host and determine how the disease is transmitted from the bacteria to humans. Among her research, she has worked on the mycobacteria that cause tuberculosis, a disease that is very common in Africa.

Thanks to her experimental results, she has contributed to the recognition of bacteria and the development of treatments and vaccines for some diseases.

Her work has been published in renowned international scientific journals such as Nature, Nature Medicine, Lancet, and Lancet Infectious Diseases.

Committed to promoting science in Africa

Very committed to promoting science in Africa, Shymaa Enany is a member of the Next Einstein Forum, an initiative that highlights African scientific talent, and she was appointed as NEF ambassador in Egypt.

During Covid 19, at the initiative of the Next Einstein Forum, she joined one of the groups of scientists set up to propose solutions to counter the pandemic on the continent. “I joined the Covid 19 diagnostic group. I was fortunate to be part of the diagnostic group that was very active. We did a lot of work. We succeeded to publish scientific paper about the diagnostic tools in Africa,”she tells Africa Women Experts.

Alongside five other researchers, she collected data in Egypt and other African countries. This work led to the publication of two articles, one on the diagnosis of Covid 19 in Africa and the other on vaccination against Covid 19 on the continent. As a reward for her commitment and scientific achievements in the field of health and pharmaceutical sciences during Covid 19, she received in October 2021 one of the 7 awards given by the International Council for Science to “early career scientists” on each continent.

Earlier in 2019, she received from the Egyptian state “The Encouragement Award for Women in Health and Pharmaceutical Sciences”. In 2018, the World Academy of Sciences also awarded her the Young Arab Scientist Award for her scientific achievements in medical sciences.

Activities for women’s leadership in science

Considered as one of Africa’s inspiring scientists today, Shymaa owes her success to her perseverance, determination and courage to overcome various obstacles, she says. “The main obstacle that all women in the world face is the double responsibility of working as a scientist while being a mother, wife and taking care of her family. I was in the same situation. I was responsible for my family, a husband, three children, and I was studying for my PhD outside my country. So I was alone and had to manage my time carefully and try to focus on my goals,”she says.

To cope, she stresses, women scientists must seek help from those around them, get organized and work consistently. “Many times, I asked family members for help. I also often worked hard through the night to achieve my goals,”she explains.

Aware of the challenges facing women scientists, Shymaa Enany advocates at various levels for the career advancement of women scientists in Africa and the Arab world. She is a member of the gender group of the African Science Leadership where she has organized several seminars to raise awareness about science among girls and women. She also served on the Scientific Committee of the Forum for Women in Science for several years. She is currently a regional member of the Arab Region Executive Council for Women Scientists Organizations in Developing Countries, a program that aims to bridge the gap between women scientists in developed and developing countries and to promote women’s scientific and technological leadership.

Involved for many years in gender issues in science, Shymaa Enany nourishes more than ever the dream of seeing young African girls shine and more women scientists emerge on the continent.