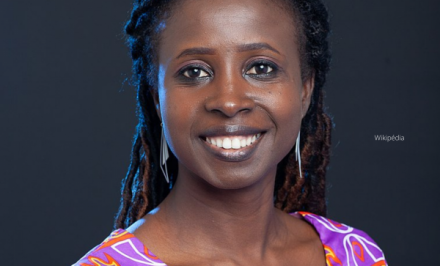 Fadimatou Noutchemo Simo is a Cameroonian entrepreneur in the field of aviation and tourism. Head of HEFA Group, she is the founder of the NGO Young African Aviation Professionals Association (YAAPA) which encourages girls and disadvantaged children from rural areas to pursue careers in aviation. Recently, she was appointed as an independent expert for the French Observatory of Sustainable Aviation.

Fadimatou Noutchemo Simo is one of the most prominent figures in African aviation today. Through her association, she campaigns for more girls and underprivileged children from rural areas to be interested in careers in aviation.

After studying economics at the University of Buea in Cameroon, she attended the International Aviation Transport Association (IATA) where she obtained a diploma.

She started her professional career in 2006 at Huawei Technologies Cameroon as a human resources officer. She then joined the Nigerian Bank United Bank for Africa in 2010, in particular the Corporate Department.

In 2010, she joined the senior team of Cameroon Airlines. She is one of the first women to reach this position within the company. In 2018, she joined Cronos Airlines Group in Equatorial Guinea as Strategic and Business Development Director. An experience that led her in 2019 to found HEFA Group, a company that brings together African consultants in various fields who are committed to facilitating business development in Africa.

In 2014, she founded YAAPA. The aim of the association being to educate through communication for safe aviation and tourism in Africa. In parallel, the NGO works to develop innovative methods to attract more young people into aviation. In particular, it advocates for girls and children from rural areas to pursue careers in aviation.

The organization also supports aviation projects initiated by organizations such as the African Union, ICAO, IATA, AFRAA, ASECNA, ATNS…in order to raise awareness to ensure the continuity and growth of African aviation.

It also develops several programs, including the Heleta Aviation Scholarship program, whose objective is to finance the studies of underprivileged primary school children by providing them with a class bag with school supplies. The initiative was launched after seeing children going to school with plastic bags. In five years, more than 10,000 young Africans have benefited from the organization’s initiatives and programs.

Fadimatou Noutchemou Simo also advocates for professions related to Sciences Technology Engineering Mathematics (STEM). She is also the Cameroon ambassador of the Next Einstein Forum (NEF) for the period 2019-2021.

In 2019, she was awarded the IATA High-flying Leader Award.

In 2021, she was elected 2nd Vice President of African Tourism Week (ASTW). Recently, in December, she was appointed as an Independent Expert of the French Observatory of Sustainable Aviation.