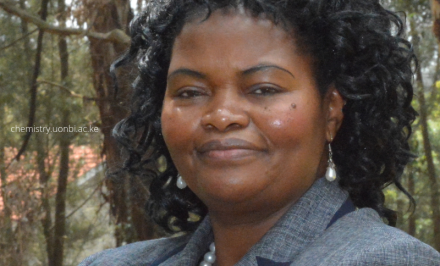 At the University of Johannesburg in South Africa, where she teaches, the Kenyan chemist Jane Catherine Ngila conducts research on the purification of polluted water using nanotechnologies to facilitate access to drinking water in Africa. Thanks to her work, she has won the 2021 « Women in Science » Award from L’Oréal-UNESCO Foundation.

Catherine Ngila is a researcher known for her work on improving water resource management in Africa. The chemist, who has a unique and inspiring background, is one of the few female university vice-chancellors in South Africa.

Born to a tribal chief father and raised in a large family of 27 children, she was the first member of her family to pursue a university education.

It was at secondary school that she developed an interest in chemistry thanks to a teacher who fascinated her. In 1986, she obtained a Bachelor’s degree in Education and a Master’s degree in Chemistry in 1992 from Jomo Kenyatta University in Nairobi. Subsequently, she received a PhD scholarship from the Australian government and in 1996 obtained a PhD in Analytical and Environmental Chemistry from the University of New South Wales in Australia.

She returned to Kenya and taught there temporarily before moving to Botswana where she worked as a lecturer from 1998 to 2006, and subsequently at the University of KwaZulu-Natal from 2006 to 2011. In 2011, she was appointed Professor of Applied Chemistry at the University of Johannesburg. There, she worked particularly on the use of nanotechnology for water purification. A problem that has always inhabited her, since she spent her childhood in an environment where drinking water was scarce. “I am particularly interested in water research because water is simply vital. Nanotechnology has an essential role to play in purification techniques,”she explains in a statement to the L’Oréal Group.

After several researches and publications on water treatment, she developed numerous methods of detecting and filtering water based on nanotechnology. Today, her dream is to develop a marketable nanofilter that can extract any pollutant in a single filtration. This would make it possible to install affordable water filters in every rural household on the African continent.

Executive Director of the African Academy of Sciences, based in Nairobi, she is also committed to « feminising » science laboratories by encouraging African girls and young women to engage in science careers.

As a result of her work, Jane Catherine Ngila was awarded the African Union’s Nkwame Nkrumah Prize for Scientific Excellence in 2016 and the L’Oréal-UNESCO Prize for Women in Science in 2021.