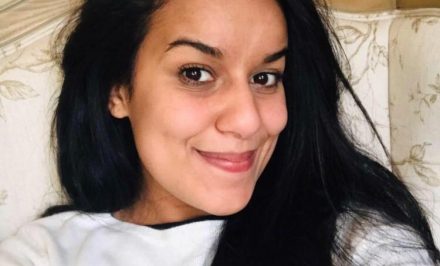 Hassna Aalouach is a French-Moroccan journalist and writer who advocates against injustice. She is the author of “Elles toutes, leurs histoires”, her second book published in 2020, which tackles 152 cases of women victims of feminicide from 2019 to 2020 in France. Africa Women Experts interviewed her on the occasion of the International Day for the Elimination of Violence against Women celebrated on Thursday, November 25.

I am a French-Moroccan journalist and writer. I have been a reporter in several countries including Morocco and I am currently writing my third book on Saharan women. I myself have this plural identity: French and Saharan and I found it interesting to show that the emancipation of women is not as contemporary as we often hear. Ancestral societies have shown that they offered another place to women long before it became in vogue; this is the case of Saharan culture in Morocco. For centuries, women have occupied an equal place in Hassani society, which values them. Families guarantee the freedom of their daughters and physical violence against women is firmly fought. When a Sahrawi man is violent with his wife, the violent man’s tribe disowns him and he brings shame and dishonour on his entire family.

On the other hand, the education of young Sahrawi girls is empowering. Freedom of speech is encouraged from an early age and respect for the person is taught before gender. For example, in the Sahara, a divorced woman is neither rejected nor plagued; on the contrary, she is welcomed by a celebration within her family who will support her and take charge of her as well as her children in her new life.

This allows the woman not to hesitate to leave if she is suffering in her husband’s house without the fear of being rejected, as is the case elsewhere. The Hassani culture has given women a status which is unfortunately exceptional, but which I thought it would be interesting to discuss in this book, which will be published in 2022.

Can you introduce your book “Elles Toutes, leurs histoires” to our readers ?

It is a survey on the victims of feminicide from April 2019 to April 2020. I denounce the judicial dysfunctions in cases of feminicide in France, the handling of victims in police stations, the management of custody rights by family court judges who are still poorly trained in these issues and who continue to give precedence to the filial bond over the interests of the mother and the children. The overloading of the courts also leads to terrible injustices. Like Julie, a 35-year-old mother of two who had filed five complaints against her violent ex-husband. The family court judge, despite the testimonies and death threats, had withdrawn custody from her and given it to the father. She requested a protection measure which was refused. On March 03, 2019, Julie was killed by her ex-husband.

What is the main message?

I immerse the reader in the reality of the ground, without analysis. Just the facts: 152 women killed by their ex-husbands or ex-partners in one year in France. The victims are aged between 15 and 90. They come from all socio-cultural categories, from housewives to internationally renowned scientists. It is deliberately very factual, a first name, a town and the brief story of this murdered woman. I denounce the judicial dysfunctions that have led to the death of many women in France who have not been protected by justice. In France, we are far from what is at stake, yet there are solutions that have proved their worth, for example, our Spanish neighbours have much better care for women victims of violence, with dedicated courts and a rapid eviction of the violent spouse from the marital home. In the police stations, too, police officers are specialised in these issues of violence.

It has already been 17 years since the Spanish deputies unanimously voted for the comprehensive protection law against gender violence, with measures such as the specialisation of the courts and the electronic bracelet. In France, the deployment of the bracelet began timidly this year, but no specialisation of the courts has yet been initiated. In Spain, 50 women were killed by their spouses or ex last year compared to 152 in France.

What led you to work more closely on domestic violence against women?

I am a humanist, I chose to be a journalist to fight injustice. I denounce all forms of violence, whether against women, men or children. I come from two cultures where women’s rights are omnipresent: Saharan and French culture. The Sahrawi woman has always been a free and strong woman as well as the French woman who has been marked by the quest for equality initiated in the 1960s.

What are the causes of the persistence of violence against women in the world despite efforts to contain it?

I am not convinced that there is such a great effort to contain it. I objectively think that the first pillar in fighting violence against women must be education. The demonisation of women must stop. We have to move towards an egalitarian quest which, in my opinion, will not be achieved without men. On the contrary, it must be part of a humanist and non-gendered struggle. We must teach both boys and girls that they are equal and that respect for their rights is equally important for both.

What you have portrayed in France in your book, do you think it is the same reality in Africa?

Feminicides do not only take place in France, unfortunately they happen everywhere in the world. Africa is made up of more than fifty countries, so we cannot speak of an African reality, but rather of a plurality of situations and conditions. We must continue to fight violence against human beings regardless of the country, culture or place.

How can we eliminate violence against women in the world today, and in Africa in particular?

No single answer can be given when talking about Africa, a continent with a thousand and one cultures and realities. The condition of women in Nouadhibou is not the same as that of women in Brazzaville or Kinshasa.

And within the same country, the condition of Moroccan women in the High Atlas is not the same as that of women in Casablanca or Laâyoune. And there again, there are so many different conditions in the same street. I believe that this is a universal struggle that is not specific to one region, one city or one continent. There are as many conditions as there are women.

To combat this violence, we must work on mentalities, starting with gender equality and the de-demonisation of women.

And this long-term work must be adapted to the reality of the country and its culture.

In the case of excision in certain African countries, for example, until a change in mentality regarding the suffering caused by this sexual mutilation is finally admitted and understood, innocent young girls will continue to pay the price in the name of the negation of  their sexuality, which is also part of this demonisation of the feminine. This is the root of the problem. The first barrier is therefore education.

Secondly, governmental support for victims is fundamental, as long as women victims of violence carry the heavy burden of guilt, and do not have moral, social, economic, administrative and judicial support, violence against women will not be reduced.

Society as a whole must support these victims of violence. This emancipation obviously also requires economic independence, which is a barrier to the departure of these women who have no other horizon than to endure in silence, not to mention the taboo that this subject represents in several societies.

Freedom of speech is essential in this fight and we must continue to raise awareness among young and old about the respect for human rights everywhere in the world.

Finally, I think a free woman is a woman who loves herself.

Let’s demystify little girls about their feminine nature, let’s teach them to love and accept themselves. Let’s change the representations of the feminine also among little boys and maybe one day together they will build a more egalitarian and less violent society.