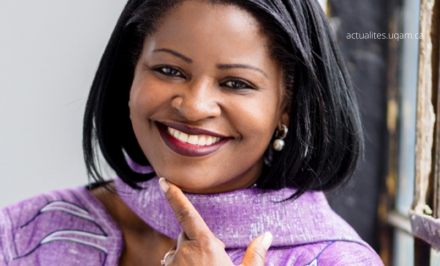 Amina Gerba is a Cameroonian businesswoman who has been living in Quebec for the past 30 years. With more than 25 years of experience in entrepreneurship, she works in particular to connect Canada and Africa, to encourage entrepreneurs from cultural communities in Canada to go into business, to promote education for girls and to encourage economic entrepreneurship for women. In July 2021, she was appointed as an independent Senator for Quebec by the Canadian Prime Minister.

Amina Gerba is an entrepreneur with an inspiring career. Born into a family of 19 children, of which she is the only girl to attend school, she arrived in Canada in 1986 with her husband, a recipient of a Canadian International Development Agency (CIDA) Doctoral fellowship.

In Canada, she resumed her studies, which she had stopped before the end of college following the birth of her first son. In 1992, she obtained a Bachelor’s degree in Tourism Management (Marketing) from the School of Management of the University of Quebec in Montréal (ESG UQAM) and a Master’s degree in Business Administration (MBA) in 1993.

Having made the choice with her husband to stay in Canada to offer more opportunities to their 4 children, she began her professional career there. From 1993 to 1995, she worked for several Canadian companies and was responsible in particular for market development in Africa. An experience that made her aware that Canadian companies lacked knowledge of the African market.

In 1995, she created Afrique Expansion, a consulting, communication and market development firm with the mission of giving companies the opportunity to do business in Africa. At the same time, she introduced potential African partners to the expertise of North American companies. The company offers various services, such as the design and implementation of communication campaigns, the organisation of events, the search for partners, accompaniment and assistance services to companies during their trips to Africa and Canada.

A major figure in the Africa-Canada relationship

In 1998, she proposed to the Minister of Industrial and Commercial Development of Cameroon to lead a trade mission to Canada and to take part in a Cameroon Economic Day in Montreal. Shortly thereafter, some twenty Cameroonian business leaders and public sector representatives traveled to various Canadian cities. Unfortunately, the event was not covered enough by the media. Her husband, a journalist by training, then founded the new magazine, Afrique Expansion, whose mission is to promote North-South investments and partnerships.

In 2003, Amina Gerba also launched the first edition of the Africa Forum in Montreal, a meeting for partnerships and business opportunities between Africa and Canada, which brings together more than 500 participants at each edition and has become the main platform for Canada-Africa meetings. An event that has welcomed many personalities, such as former Nigerian president Olesegun Obasanjo, former president of Mali Alpha Oumar Konaré, Louis Vachon, president of the National Bank of Canada…

In 2018, she became President of the Board of Directors of « Entreprendre ici », an organisation set up as part of Quebec’s 2017-2022 governmental action plan on entrepreneurship to support entrepreneurs from cultural communities. In July 2021, she was appointed as an Independent Senator for Quebec by Canadian Prime Minister Justin Trudeau, because of her long-standing commitment to bridging Canada’s communities, minority inclusion and women’s economic entrepreneurship.

In addition to her commitment to developing business relations between Canada and Africa, she also works to empower women. In 1998, she founded Kariderm, a company of cosmetic beauty based on shea butter produced by a cooperative in Burkina Faso. To contribute to the empowerment of these women, she gives them a share of the profits from sales and allows them access to community microcredit programs to buy shea nuts.

With her two daughters, she also set up the Gerba Foundation, which helps little girls in Cameroon go to school by financing their education.

Amina Gerba also sits on several boards of directors, including the University of Quebec in Montreal, the Canadian Council for Africa, the Organisation « Together for respect and diversity »… She has received several awards and distinctions. In 2012, she was awarded the Recognition Award from the School of Management Sciences (ESG UQAM). In 2014, the Quebec government made her « a Knight of the National Order of Quebec ». She was also ranked among the 25 women of influence in Quebec by Les Affaires newspaper.