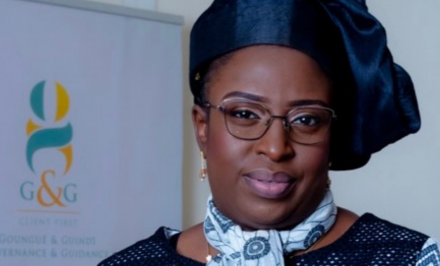 From simple accounting to strategic business support… Ndeye Marième Fall gave a new impetus to her career, by creating the company G&G in 2015. Eager to give a deeper meaning to her profession as a chartered accountant, the Senegalese entrepreneur now devotes her time to supporting business leaders to help them succeed in their entrepreneurial adventure.

Passionate about numbers since her childhood, it was only natural that Ndeye Marième Fall decided to take the path of accounting and finance. A career choice that took her far beyond the world of figures, as over the years she discovered the associative environment and coaching. Today, she is the President of Réseau Entreprendre Dakar and is committed to the development of young Senegalese entrepreneurs.

Ndeye Marième Fall became aware of her vocation very early on. While in her first year of high school, she decided to specialise in finance after discovering the problem of financing faced by farmers during her visit to the Institute of Food Technology. “After visiting several institutes, I realised that there were a lot of achievements and initiatives, but the problem of funding kept coming up. So I said to myself that I was going to create a structure capable of facilitating the obtaining of funding,” she confides.

After graduating from high school, she flew to France where she joined the faculty of economics and management and obtained a DEUG (university diploma). Two years at university were enough to further increase her passion for figures and finance. She then went on to do a master’s degree in accounting and financial sciences and techniques in Rouen, the path that would lead her to become a chartered accountant. After her master’s degree in 2003, the young laureate decided to return to Senegal to pursue her professional career. Initially going on holiday in her country, she finally decided to stay there after being selected by Ernst & Young as a junior auditor. “I wanted to return to Senegal. I didn’t want to stay in France, I wanted to work at home. I told myself that if I started working in France, it would be difficult to return afterwards,” she told Africa Women Experts.

Supporting business leaders to succeed in their entrepreneurial adventure

After three years at BDO, Ndeye Marième Fall joined Citi Bank in 2013 as a Director of internal audit. An experience that allowed her to “know what happens on the other side of the auditors”, she explains, and to get to know the financing processes, to discover the world of investment banking… But after two years within the bank, she decided in 2015 to go into entrepreneurship instead. “After a while, I felt that I didn’t belong there anymore, I had to start something, I had to realise this ambition to accompany others and to offer something new”, she confides. She also made this decision because of several previous frustrations. “In the firms where I worked, we just identified problems without proposing solutions. My vision was to focus on providing solutions to entrepreneurs so that they no longer felt alone,” she says.

Despite her determination to embark on entrepreneurship, her choice was not necessarily well received by those around her. “In the bank, I was in a management position. When you tell people, ‘I’m quitting, I’m starting my business,’ people don’t understand you. They say to themselves, ‘what are you looking for, when you have a really good job?’ Even the family, the parents do not necessarily understand. At the start it is a challenge, a questioning. You wonder if you have made the right decision, ”she confides.

In 2015, she created the firm G&G, (in Wolof “Goungué Ak Guindi” and in English “Governance & Guidance”) with the vision of being rooted in the Senegalese culture while being open to the international. The company’s mission is to accompany, help and guide the entrepreneur to succeed in his/her entrepreneurial adventure. At the beginning, the firm offered its clients support in financial, administrative and human resources management, but very quickly,Ndeye Marième Fall realised that this was not enough and became aware of the need for support for business leaders. “At some point, I felt the need, beyond the figures, that something else was needed. Because in fact, the figures are only the result of decisions taken upstream. Instead of just seeing bad figures, I thought it was better to go further upstream to guide these strategic decisions that have an impact on the figures,” she explains.

She then trained as an executive business coach and accompanied company leaders in the development of soft skills, to better understand their vision, their challenges, define their objectives and develop their execution strategy. Each year, the firm accompanies about thirty companies in Senegal. In 2021, despite the crisis linked to the Covid 19 pandemic, the company is showing growth and now aims to open up on the continent.

Ndeye Marième Fall is now one of Senegal’s successful entrepreneurs. In addition to her commitment to young people and entrepreneurs, the Senegalese entrepreneur now aims to support Senegalese women to help them meet the challenges they face, particularly in the field of finance, and thus better succeed their entrepreneurial journey.