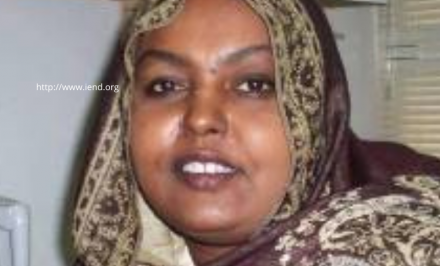 Hiba Salah-Eldin Mohamed is a Sudanese molecular biologist. She specializes in leishmaniasis, a parasitic disease that is widespread in Sudan. In 2007, she won the prestigious Pfizer Royal Society Award and later on, the Wellcome Trust Research Development Award.

Today, Hiba Salah-Eldin Mohamed is one of the few female specialists in Africa on leishmaniasis, a parasitic disease that puts 350 million people worldwide at risk annually and leads to infection, disfigurement and death if left untreated. Despite extensive research into this disease, there are still no reliable preventive measures.

For several years, the Sudanese researcher, who teaches at the University of Khartoum, has been working to identify the genetic factors that can lead to this disease.

After a bachelor degree in zoology in 1993 at the University of Khartoum, she pursued a master degree in 1998. It is during her master’s research at the Institute of Endemic Diseases that she chose to work on leishmaniasis. Sudan is one of the most affected countries in the world with infection rates reaching 30% and the village she comes from experienced a severe leishmaniasis epidemic in the 90’s that killed 100,000 people out of a population of 300,000.

Following her master’s research, she worked in greater depth on the disease during her doctoral thesis, which she completed at the Institute of Medical Research at Cambridge University in 2002. She is particularly interested in the genetic factors of visceral leishmaniasis.

With a doctorate in her pocket, she was immediately retained at the Institute of Endemic Diseases and taught in the Department of Molecular Biology at the University of Khartoum.

Through her work, she discovered, among other things, that there is an association between the immunoglobin gene and the acceptability of leishmaniasis.

Her main ambition today is to determine which genes are responsible for leishmaniasis, which would allow the development of therapies to prevent the disease.As a result of her work, in 2007 she won the Royal Society Pfizer Prize. She also won the Wellcome Trust Research Development Award, which aims to encourage and promote research to improve human and animal health.

In 2010, she was named a member of the Global Young Academic