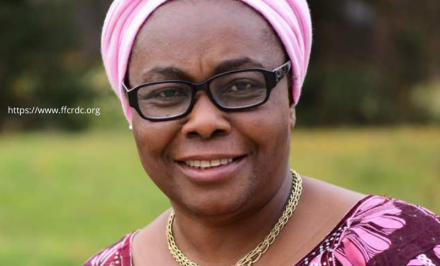 Julienne Lusenge is a Congolese human rights activist committed to helping women victims of violence. Executive Director of the Congolese Women’s Fund (FFC), she won the international “I-Angel” prize on 20 August for her leadership model in the fight against gender-based violence.

Julienne Lusenge has more than 30 years of activism to her credit.  The Congolese woman is known for her commitment to fight against impunity for gender-based violence. In North Kivu, in the east of the DRC, a region plagued by a 16-year conflict, several armed groups still sow terror and use sexual violence as a weapon against women and young girls in times of war and make women’s bodies “a battlefield”, the Congolese activist told UN Info.

She became an activist in 1998 after witnessing several members of armed groups raping and brutalising women in her community. She then began her activism and raised awareness of the rights of women in the east of the DRC and organised awareness campaigns to ensure that they had access to justice. In 2000, she contributed to the creation of the Association « Solidarité Féminine pour la paix et le développement intégral » (SOFEPADI). The aim is to give a voice to the victims and survivors of sexual violence and to give more visibility to the problem of sexual violence against women, girls and even children in times of war.

An association committed on all fronts

Within the association, she denounces the use of rape as a weapon of war and demands that the issue be addressed, both economically and militarily, by disarming the armed groups, but also by a change in mentality regarding women’s rights in DRC. Her association is carrying several campaigns to raise awareness among the population in the east of the country. It also stresses the importance of combating impunity by training police officers to draw up reports when women file complaints or report violence.

In addition, the association works within the Karibuni Wamama clinic in Bunia to provide health care for victims of violence. The association also works to ensure that these women are accepted and reintegrated into their communities and helps to provide them with psychological and emotional support.