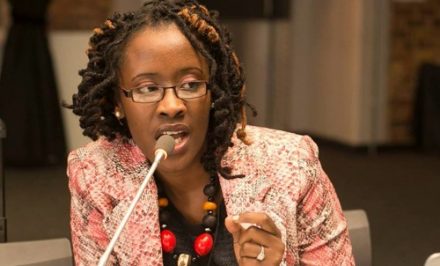 For several years, Nathalie Munyampenda has campaigned for education and technological innovation in Africa. A former Director General of the Next Einstein Forum (NEF), an initiative to promote scientific research and highlight young African scientists, the Rwandan has since 2020 been leading Kepler, an international organization focused on education, coaching and preparation for the professional world.

In recent years, Nathalie Munyampenda has become known around the world for her commitment to the promotion of African scientific talent, notably by heading the Next Einstein Forum (NEF). Although she has a degree in communication, this has not prevented her from spearheading the promotion of scientific research in Africa. As the Executive Director of NEF from 2018 to 2020, she has been an advocate for innovation and the transformation of Africa through science, mathematics and technology, a vector for job creation in Africa, in the largest panels bringing together heads of state, governments, scientists and African entrepreneurs.

It was in Canada that the Rwandan, who graduated in Political Economy, and then in communication in the United States, began her career. For four years, she worked with the Canadian government, notably within the Ministry of Public Works and Government Services as assistant to the Director General. Convinced that she could not have any added value by staying in Canada, she decided to return to Rwanda in 2013. She worked for two years for the Rwandan government, in particular as a coordinator in the office of the spokesperson of the government and was responsible for coordinating government communications.

This experience opened her eyes to the challenges facing Africa and convinced her that science was the most appropriate means to ensure Africa’s socio-economic transformation.

In 2014, she joined the African Institute of Mathematical Sciences (AIMS) at the origin of the Next Einstein Forum as communication and media manager. She subsequently became « Associate Director, Partnerships and Public Engagement », and worked to build partnerships for the NEF. In 2018, she became Director General of the NEF. An initiative that has a network of nearly 2,000 science graduates across Africa.

She was also in charge of communications for the AIMS group and was the editor-in-chief of NEF’s public magazine, a scientific African Magazine, which aims to democratise access to science.

Created in 2013, this initiative aims to bring together scientists and the business and political world to highlight scientific innovations in Africa and their contribution to Africa’s transformation.

In 2020, she left the NEF and joined Kepler as CEO, a Rwanda-based nonprofit higher education program that offers scholarships to the best secondary education graduates in Rwanda to pursue university studies. Its pedagogy combines online courses, with face-to-face animation and professional training.

Nathalie Munyampenda strongly advocates for skills-based education as a condition for improving youth access to employment in Africa.