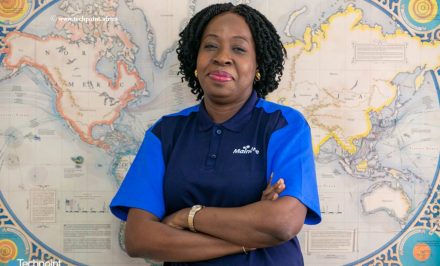 Funke Opeke is a Nigerian electrical engineer. After a long and successful career in the United States, she returned to her country, Nigeria, and founded the “Main One Cable Company ” in 2008 to improve internet connectivity in Nigeria.

Funke Opeke is a Nigerian entrepreneur who has made significant contributions to improving internet connectivity in Nigeria, including building Africa’s first private submarine cable in 2010. Through « Main One cable company », she has become the data solutions provider for major telecom operators in Nigeria.

It was in the United States that this native of Ondo State in Nigeria made her debut in the telecommunications world. After a Bachelor in 1981 and a Masters in Electrical Engineering in 1984, respectively from Obafemi Owolowo University in Nigeria and Columbia University, she embarked on ICT in the United States, notably as Executive Director of the wholesale division of Verizon Communications in New York. She also worked in other companies such as PA consulting… and got more than twenty years of experience.

In 2005, she decided to return to Nigeria. She was immediately recruited by the local branch of the operator MTN as Operations Manager and worked actively to improve internet access in the country. Among other things, she worked to bridge the infrastructure gap for better internet connectivity through the development of submarine cables.

Seeing no progress despite her efforts, she decided to set up her own business and in 2008 created « Main One », a company that offers internet solutions. Aware of the connectivity challenges between Nigeria and the rest of the world, she committed to raising funds for her project. She managed to raise $240 million in 2008 and created a submarine fibre optic cable network that stretches from Nigeria to Portugal over 7000 km, the first private African submarine cable.

Over time, she managed to expand her services in the West African sub-region and set up her company in Ghana, Côte d’Ivoire, to cover French-speaking Africa.

Funke Opeke is also the founder of Mainstreet technologies, a financial software development company that provides services to governments and the private sector.

In 2017, she was ranked among the 50 most influential people in the economy in the Europe, Middle East and Africa region during the Data Cloud Europe.