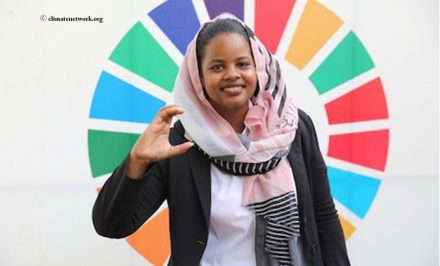 Nisreen Elsaim is a young Sudanese activist very committed to climate issues. Coming from a country plagued by the adverse effects of climate change, she has been an activist on climate issues since 2012. In August 2020, she was appointed Chair of the UN Secretary General’s Youth Advisory Group on Climate Change, Climate and Security.

Nisreen Elsaim is 26 years old, but is today one of the leading figures on climate and security issues in the world. As Chair of the UN Secretary General’s Youth Advisory Group, the young woman intervenes in the largest panels bringing together heads of state, ministers, UN officials … far older than her, but she stands out for her positions on the urgent issue of climate change.

It was during her university studies that the young woman began to campaign in various organizations working on climate and security issues in Africa. She made her voice heard on the subject, sounding the alarm bell on the urgency of raising awareness about climate change, the urgency of taking concrete measures …

She is a member of the Youth Environment Sudan (YES), an organization gathering the action of more than 1000 environmental associations in Sudan and of which she is now the coordinator in Sudan.

Thanks to her commitment to climate issues, she was also appointed co-chair of the Sudanese Youth for Climate Change (SYOCC). She would later lead the African Youth Conference (COY Africa).

She is also an active member of the Pan-African Alliance for Climate Justice, a consortium of more than 1,000 organizations from 48 African countries that work together to address climate issues and environmental challenges facing humanity and the planet.

In 2019, she was named as one of the 30 UN Youth Special Envoys. That same year, she organized the Youth Climate Summit.

In August 2020, she was appointed as the Chair of the UN Secretary General’s Youth Advisory Group.

In 2020, the Africa Youth Awards named her one of the top 100 most influential young people in the world.