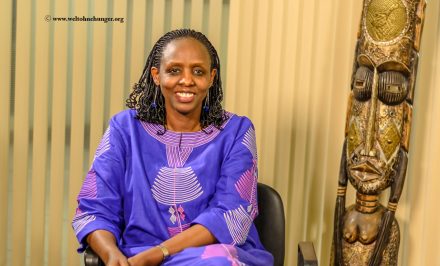 Agnès Kalibata is a Rwandan agricultural scientist. Since 2014, she has chaired the Alliance for a Green Revolution in Africa (AGRA), an organisation working to improve food security in Africa.

Born into a family of small farmers in Rwanda displaced in the early 1960s by the war for independence, she spent her childhood in a refugee camp in Uganda where her parents grew maize and beans. She too decided to devote her life to agriculture, but as a scientist and researcher.

At university, she majored in agriculture, earning a bachelor’s degree in entomology and biochemistry, followed by a master’s degree in agriculture from Makerere University in Uganda. Then, she obtained a doctorate in entomology at the University of Massachusetts Amherst in 2005. After graduating, she joined the International Institute of Tropical Agriculture (IITA), the Kawanda Agricultural Research Institute, where she conducted research in collaboration with Makerere University in Uganda and the University of Massachusetts.

She then returned to Rwanda where she served as Minister of Agriculture and Animal Resources (MINAGRI) between 2008 and 2014. She led, in particular, programs in favour of small farmers and to ensure food security in the country. Among other things, she encouraged the use of scientific approaches to agriculture to increase food production.

In 2014, she briefly served as Deputy Vice-Chancellor of the University of Rwanda in charge of institutional advancement.

That same year, she was appointed Chair of the Alliance for a Green Revolution in Africa (AGRA), an organisation whose mission is to improve food security and incomes of African households, including by providing better seeds and giving access to credit.

She is also a member of several boards, councils and commissions including the Global Commission on Adaptation, the Global Agenda Council of the World Economic Forum, the Malabo-Montpellier panel, the Food and Land Use Coalition (FOLU), the International Fertilizer Development Corporation (IFDC)…

In 2019, she was appointed by the UN SG as Special Envoy for the 2021 Food Systems Summit.

In 2012, she was awarded the Yara Prize (now called the Africa Food Prize) for her efforts to change the reality of agriculture in Africa.

In 2018, the University of Liege, Belgium, awarded her an honorary doctorate for her leadership.