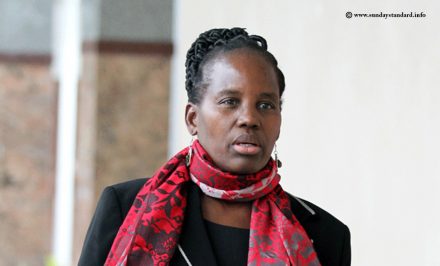 Unity Dow is a lawyer, writer, politician and women’s rights activist from Botswana. Thanks to a lawsuit she initiated in the 1990s, Botswana women were granted the right to pass on their nationality to their children.

Lawyer, writer, women’s rights activist and politician, Unity Dow is a woman with many hats. Born in 1959 in Botswana, she began studying law in Swaziland, before pursuing her training in Scotland at the University of Edinburgh where she was one of the few girls enrolled in law school. Back in Botswana, she joined a human rights NGO in her village where she worked on children’s rights issues and property rights for women. This is where she realized that in the law, there was a huge amount of inequality between men and women and committed to defending women’s rights. “The language of law is very masculine. The culture of law is so masculine. At one point, I started to think that it shouldn’t be like this and that I have a right to be where I am, ”she told CNN. In the late 1980s, she became a criminal prosecutor and criminal defense lawyer in Botswana.

A dazzling success in law

In the early 1990s, she became known thanks to a lawsuit she initiated to challenge Botswana law, which only granted men the right to transmit nationality to their children in case of mixed marriages. Actually, being married to an American, she realized that she could not pass on her nationality to her children. She believed the law was unfair and decided to prove it unconstitutional. After five years of trial during which she was the target of criticism from those around her and the media, she ended up winning her case. “It wasn’t that simple. But in the end, I won. It not only changed the law on citizenship, so that men and women were equal in citizenship, it actually influenced other laws, ”she told CNN. Through her experience, Botswana changed its nationality law in favor of women and also decided to amend several laws that discriminate women. In 1998, she was appointed judge of the Supreme Court. She is the first woman to hold that position in Botswana. She retired in 2009.

Along with her career in law, she developed a passion for novel writing. She published five novels whose themes deal with the fight against western and traditional values, gender issues and poverty in her country. Among her novels are “Saturday is for funerals” which tackles the subject of AIDS in Africa, “The screaming of the innocent” published in 2002, “Far and Beyon”, “The heavens may fall” …

Unity Dow has also published various writings on the links between the Convention on the Rights of the Child and the legal status of children in Botswana.