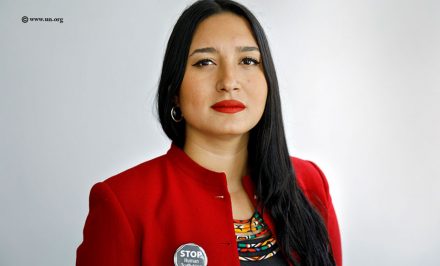 At 31, Racha Haffar is a Tunisian activist involved in the fight against human trafficking, sexual slavery, forced labor and sexual exploitation. Thanks to her commitment, she has received several prizes, namely the United Nations Association’s Women’s Rights Award, the University of Kentucky’s Leadership Award and a Thomson Reuters Foundation award.

For the Tunisian activist, the fight against human trafficking is a “personal duty and mission in life”. It all started when she was 18. She got a scholarship to England, but needed to work. She decided to put her CV online as a babysitter. As some families started reaching out to her, she asked to video chat with them and the children she was supposed to look for. Their reluctance made her feel suspicious.  After doing some research online, she realized that that was how girls were trafficked for exploitation abroad. She decided to drop the scholarship and studied in Tunisia.

Years later, during a trip to Italy as part of her double master’s degree in international relations and international development between the universities of Tunis and Palermo in Italy, she met a Nigerian survivor who was trafficked to sexual exploitation for several years. She therefore decided to devote her research master to “trafficking in women in post-revolution Tunisia”. Meanwhile, she discovered that there was no local NGO fighting against human trafficking in Tunisia. “It made me feel the responsibility to found the first non profit organization in Tunisia that is solely focused on trafficking holding an expertise in the field“, she said.

“Not 4 Trade”, a commitment in favor of migrants, women, young people

In 2016, at the age of 26, she founded “Not 4 Trade”. The NGO works, in particular on partnerships in prevention of human trafficking through education, training, capacity building … of civil society, media, young leaders. It also focuses on sub-Saharan migrants who are trafficked in Tunisia by working to change the legal framework that puts them in vulnerable situations in order to prevent them from the coming traffic. The NGO is also committed to women and protects them against human trafficking by educating them. “I realized that when I was 18, I could have been a victim of these traffickers, but I had the privilege of having access to information, to Internet. So I had a way out, before I fell into this trap. But other girls are fooled into it because they need to find a means of living and these traffickers abuse that vulnerability,”she explains.

In four years, the NGO has faced several obstacles, including exclusion, lack of funding … “There was no funding. I talked to all the funders in Tunisia and got some promises, then people changed their mind. It has been really challenging, but that did not stop me. Even today, I still run the organization with zero budget ”, she explains.

Despite these challenges, the NGO intends to continue its fight by launching very soon an initiative  known as “Youth Against Slavery Movement”. The new project aims to create a new wave of young engaged activists to continue the work on trafficking with a fresh look consisting of tackling its root causes. Her ambition is to shift the narrative around human trafficking and modern slavery and insure that youth is included in all the processes, so that their voices are heard and their work is acknowledged and recognized.