Ethiopia: Bethlehem Tilahun Alemu, the businesswoman who conquers the world with her shoes 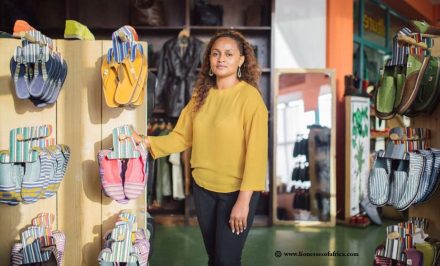 Bethlehem Tilahun Alemu is an Ethiopian entrepreneur. At 25, just after her studies, she embarked on entrepreneurship. She founded SoleRebels, a footwear company using recycled tires. In 2014, Forbes named it the fastest growing African brand company.

It was in the poor district of Zenabwork (Addis Ababa) that Bethlehem Tilahun Alemu spent her childhood. Despite coming from a humble background, she managed to earn a degree in accounting in 2004 at the age of 24. After working for a year as an accountant, she decided to quit her job, with one idea in mind : becoming an entrepreneur. Her neighbourhood being known for the wealth of its craftsmen, she decided to seize this opportunity. She launched a shoe company using recycled tires, a cheap and available raw material. With five workers and an investment of $ 5,000, she set up SoleRebels, a brand of shoes made from recycled tires and cotton.

The first two years of the company were not easy, given the challenge to find the best design for its shoes. With the first prototypes, it put on the market heavy shoes, weighing 6 kilos per shoe. After two years, she finally managed to find the best design and drew on seleates and barabassos, nigerian traditional shoes. New designs became successful. In 2012, the brand had stores in 20 countries. The same year, Forbes magazine named Alemu the most influential woman on the African continent. SoleRebels shoes are sold in London, New York…

An entrepreneurial thirst to develop Africa

Having grown up in a disadvantaged neighborhood, her ambition was to fight against unemployment in Addis Abbéba. “I wanted to do something that would give job opportunities to people around me. I immediately thought: I have to start a small business, “she told Espritentrepreneur.net.

From its opening until 2018, SoleRebels had created 1,200 jobs in Ethiopia. At the end of 2015, its international stores generated more than 600 jobs in the countries where they are located. The young entrepreneur managed to propel her business by signing partnerships with e-commerce giants such as Amazon, Endless, Javari, Spartcoo.com… In addition to her shoe brand, she also launched « The Republic of leather », a collection of luxury items made from leather. In 2016, she also launched “Garden of coffee”, a concept to promote Ethiopian coffees.

Her entrepreneurial success has earned her several distinctions. In 2013, she was named as one of the “25 Most Influential Women in Africa” by The Guardian.