Login Sign Up
Headlines :
Ethiopia: Bethlehem Tilahun Alemu, the businesswoman who conquers the world with her shoes 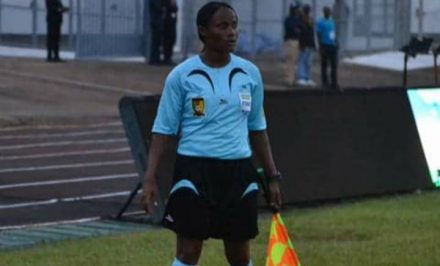 Atezambong Fomo Carine is a Cameroonian football referee. She is a former karateka and judoka. In 2014, she became the only woman referee in men’s football league 1 of Cameroon National Championship. In 2015, the International Federation of Football Association (FIFA) appointed her as an international referee.

For Carine Atezambong Fomo, sport is a matter of passion. In fact, the Cameroonian became interested in sports while in high school. She practiced karate during seven years and even participated in international competitions. At university, she decided to move to handball, since Karate was not an Olympic sport. However, during her handball training session, a judo teacher noticed her physical capacities and convinced her to become a judoka. She accepted and even joined later the judo national team.

In 2008, after enrolling at the National Institute for Youth and Sports (NIYS), which trains sports teachers and coaches, her father advised her to specialize in refereeing. Unfortunately, as the institute did not train referees, she chose football. « It was very strange that I had to play football especially that I had already spent seven years of karate, five to six years of judo. Even my judo masters got angry, since I was in the national team. But I told myself that I would play football to discover another discipline », she remembers.

On the advice of her football teacher, she joined the Departmental League in 2009 where she learnt refereeing. « I went to stadiums. People insulted me, yelled at me, because at that time, I still did not master the rules of the game. I did not care at all because I had faced this kind of things before”, she said.

In 2009, after 6 months of internship, she became referee of Cameroon Women’s National Championship. In 2012, she set herself a new challenge. She wanted to referee men’s football championship. At that time, no woman referee managed to do it, since the tests were adapted to men’s physique. After successfully validating those tests, Carine joined men’s league 2. In 2014, she moved to men’s league 1, becoming the only woman to referee men’s football championship. The same year, the International Federation of Football Association (FIFA) appointed her as international referee.

Since then, she has refereed several men’s matches in the Cameroonian Championship, including the Cameroon Cup final in 2014. She also refereed at the international level, notably during the African Cup of Nations (CAN) in 2016, the African Games in Brazzaville in 2015, the qualifying matches for the World Cup and the Olympic Games … During these enriching experiences, she also made some serious mistakes, but they all contributed to making her, a skilful, respected and bold referee.