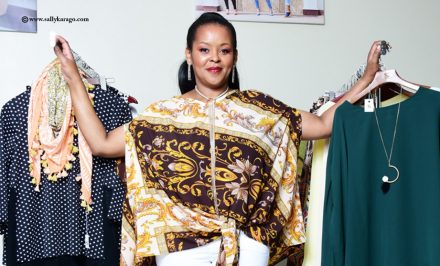 Sally Karago is one of the pioneers of the Kenyan fashion industry. In the early 90s, she launched the « Mcensal Fashion House ». Within a few years, she has become the designer of the country’s highest personalities. In 2009, she also founded the Mcensal school of fashion to train more fashion designers in Kenya.

Sally Karago is one of the designers who introduced fashion as a concept in Kenya. After studying in London, she opened the « Mcensal Fashion House » in the 90s. « When I returned, Kenya had still not opened up to the fashion industry. A lot of people did not know what a “fashion designer” is . If you met a local fashion designer, it meant he had failed school. We were seen as failures. I had no idea where to start. All I knew was that I had to start a fashion studio and I started one. I wondered what my future would be in this industry », she told Standard media.

At the beginning, her customers were mainly her friends, family, entourage. But within a few years, thanks to her brand, she managed to succeed in the fashion industry in Kenya, but also in Africa and internationally. In 1993, she won the Smirnoff Fashion Awards and in 1996, the « Mnet Face of Africa » competition.

Known as one of the pioneers of fashion design in Kenya, she became famous through her creations where she incorporated for the first time the culture of the indigenous Maasai peoples, in particular their black and red striped fabric and the kikoi (a specific fabric in Africa from the east), notably in her collection « Made in Kenya by a Kenyan ».

She is also known for her creations inspired by contemporary Africa. In London and New York, during fashion shows, she presented her Turkana collection inspired by Moroccan bohemian fashion. She has taken part to several fashion shows  throughout the world, including African Fashion Week in New York.

Sally also works to develop fashion industry in Kenya and Africa. « Young designers would come to my studio and ask a lot of questions about fashion. I gave them a little test, but a lot of them seemed very confused. I made this observation for two or three years and I felt the need for a fashion school in Kenya », she told Standard media. In 2009, she founded the « Mcensal school of fashion design » which has become one of the largest fashion design schools in Kenya.

Today, Sally Karago is also the chair of the Kenya Fashion Designers Association.