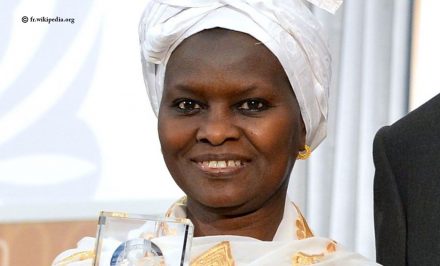 Fatimata M’Baye is a Mauritanian lawyer. She is the founder of the Mauritanian Human Rights Association (AMDH) and the country’s first female lawyer. She has committed to ending slavery in Mauritania and promoting the rights of women and children for the past 30 years.

In her sixties, Fatimata M’Baye continues to defend the rights of Mauritanian populations victims of slavery, women affected by violence or girls forced into marriage, despite her numerous imprisonments, tortures… In 1991, she created the Mauritanian Human Rights Association (AMDH) and became later on, the vice-president of the International Federation of Human Rights (FIDH).

But her commitment for women’s rights began earlier. At the age of 12, she was married to a 45-year-old man. This marriage pushed her to revolt. She fought for a divorce which she got at 18 and committed to promoting Mauritanian women’s rights. « This page in my life allowed me to actually understand all these little girls who are married very early and whose childhood is simply stolen », she told VOA Africa.

After studying law from 1981 to 1985 at Nouakchott University, she decided to pursue a career as a lawyer, becoming the only woman to join the bar at the time. At the beginning, she was a general lawyer and over time she specialized in children and women’s rights. She also fought to end discrimination against black Mauritanians victims of slavery in the country. A fight that cost her dearly and led her to prison several times.

Despite numerous conflicts with justice, given  her commitment to abolish slavery against black Mauritanians, she continued to advocate for human rights, in particular to end violence against women, genital mutilation, inaccessible employment. She obtained the first conviction for children’s exploitation in Mauritania. She also obtained the first indictment for slavery and one of the first prison terms under Mauritania’s 2007 anti-slavery law.In 1999, she won the International Human Rights Prize at Nuremberg. In 2012, the U.S Department of State awarded her the « Trafficking in Persons Report » prize. In 2015, Jeune Afrique ranked her in the « Top 50 Most Powerful Women in Africa ». In 2017, the UN appointed her as an expert to investigate violence in the Kasai region in the Democratic Republic of Congo (DRC).