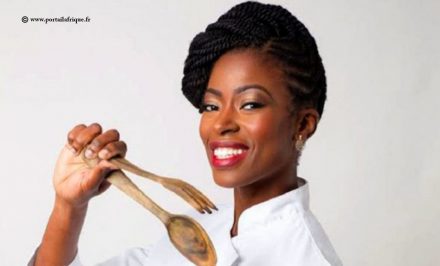 Antompindi Cocagne is a Gabonese chef, cooking show host on Canal + and author of a book on African cuisine. In 2018, she received the « Award for the greatest creativity » during the « Cuillère d’or » competition. Her cooking aims to make African culinary art more visible, especially in France.

For Chef Anto, cooking is more than just a normal activity. It is a passion, but above all a profession where she intends to climb the ladder, since there are still few women among the most starred chefs.

Her love for cooking began when she was only 14 years old. During family celebrations, she used to cook, like all the young girls of the family, but nothing more. After finishing high school, while choosing the path for her future career, she realized that cooking was a passion for her. She intended to become a cooker. A choice that her parents, engineer and nutritionist, disapproved and rejected as a domestic work.

After convincing her parents, she finally enroled at Lycée hôtelier Lesdiguières in Grenoble, in 2002 where she obtained a diploma in culinary arts. In 2006, she joined Grégoire Ferrandi School of French Cuisine in Paris, for a bachelor’s degree in catering and reception organization. She then flew to the United States where she  studied at the Culinary Arts School in Providence.

Back from the USA in 2009, she worked in the major French houses such as « les Délices d’Alice », « La Matelote » … and with the greatest French chefs such as Eric Pras. But in 2016, she decided to work on her own. Due to the lack of financial means, she could not open her own restaurant. She chose to become a home cooking chef.

In her cooking, she highlights traditional African products and dishes that she presents in a modern way. She also launched a blog and a youtube channel to share her recipes.

In 2017, she initiated “We eat Africa” festival to further promote African cuisine. “I realized that there was something to do to promote African cuisine and the professionals who are working to make it known,” she told Esimbi magazine. Each year, the festival, which takes place in an African country, gathers several great African chefs to present the beauty and authenticity of African dishes to the world.

In 2019, she started to host a cooking show on Canal + channel entitled « Rendez-vous with Chef Anto » where she presents a variety of dishes from different African countries. The same year, she published the cookbook « Tastes of Africa: recipes and encounters » where she talks about the wealth of African products and recipes.

In 2016, she won the African Female Revelation of the Year Award at the « Gala Africa COP22 » in the gastronomy category during the Climate Summit in Marrakech.