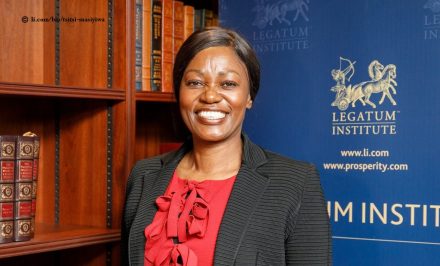 Tsitsi Masiyiwa is a Zimbabwean philanthropist and social entrepreneur. In the early 1990s, she and her husband found themselves in a legal clash with the Zimbabwean government. Moreover, their business went bankrupt. A situation that led her to question herself. She then decided to commit herself in favor of orphans. In more than 20 years, she has helped more than 250,000 orphans in Zimbabwe, Burundi, Botswana, Lesotho … through her organization « Higherlife foundation ».

It was in the mid-1990s, in the midst of financial difficulties, and at a time of severe AIDS spread in the country, that Tsitsi committed to helping orphans who had lost their parents due to illness. In early 1993, she and her husband experienced a real descent into hell. After living an affluent life while providing energy services to the Zimbabwean government through their company, Retrofit Engineering, the couple was left with nothing overnight. In fact, Strive Masiyiwa, her husband, wished to create a mobile telephone company. But the government refused wanted to keep the monopoly and refused him the licence of exploitation. They decided to attack the government in court. The clash between the couple and the government lasted more than five years. Unable to pay the employees of their electricity company, they were forced to shut down. “Our resources were so weak that we could not even offer a cup of tea to the people we received at home. We could barely make ends meet, ” she tells Africawomenforum.

As a strong christian believer, she decided to trust God. “We were dry. I tried to understand what was going on around me and I did a lot of introspection. I prayed to God and told him that if we would get the license to operate the mobile phone in Zimbabwe, I would help as many poor people as possible for as long as I live “, she said to the media.

In 1996, although the conflict with the government was not yet resolved, she created the Higherlife Foundation to support orphans and vulnerable children in Zimbabwe. At the very beginning, she organized a big party in honor of the orphans. But very quickly, she decided not only to feed the orphans, but to help them feed themselves by investing in their studies.

In 1997, the court proved them right at the expense of the government. After their company, Econet Wireless, took off in 1998, she decided to fulfill her promise.

Committed to the education of orphans

In the early 2000s, she launched Higherlife Foundation, a scholarship program for orphans in Zimbabwe. Several of the scholarship students went on to pursue studies, notably in the United States. Some even joined the biggest universities: Cambridge, Yale, Harvard. In twenty years, 250,000 orphans have benefited from these grants, not only in Zimbabwe, but also in Burundi, Botswana and Lesotho where the company operates. Passionate about technology and innovation, she also developed an online platform “Ruzivo Digital Learning” which offers courses to thousands of students every month.

In 2014, the couple co-founded a technological center « Muzinda Hub » which trains 1,000 young Zimbabweans in digital skills and computer programming. In 2016, she was named « African Woman of the Year » by the magazine New African Woman.

Before embarking on philanthropy, she was Executive Director of Empretec Zimbabwe in 1994. A program which aimed at bringing together Small and medium enterprises (SMEs) and multinationals in the country. She holds an MBA from the University of Zimbabwe.