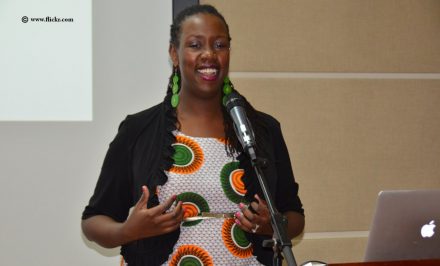 At the head of the African Women in Agricultural Research and Development (AWARD), the Kenyan Wanjiru-Kamau-Rutenberg is committed to making women more present in agricultural research and innovation in Africa. She also works to end the under-representation of women in leadership positions in Africa through her organization, Akili Dada.

With her broad smile that never leaves her, Wanjiru Kamau-Ruthenberg defends wherever she goes, with charisma and enthusiasm, women’s access to leadership positions in scientific fields, in particular agricultural research where African women are almost absent. She has led AWARD since 2014, embodying female leadership, which she seeks to instill in African women researchers.

She runs one of the largest networks of women researchers in the agricultural field, although her initial training did not allow her that. She holds a doctorate in political science from the University of Minnesota. She was an assistant professor at the University of San Francisco from 2008 to 2014 and a lecturer in international relations at Hekima College, within the Catholic University of East Africa, from 2013 to 2014. During her career in academia, she mainly focused on international development aid policies, international philanthropy policies, African politics, international relations, race policies and ethnic identity. Thanks to her commitment to end the under-representation of women in decision-making positions through her organization Akili Dada and her doctoral thesis which she devoted to women’s leadership, she was chosen at the head of AWARD, which promotes more African women in agricultural research.

In 2005, she founded Akili Dada, a leadership incubator that invests in promising young women from underserved families who are eager to bring change to their communities. Through her organization, Wanjiru’s vision is to promote a society where African women leaders actively participate in decision-making in all sectors. In nine years, the organization has awarded 162 academic scholarships to female students from disadvantaged backgrounds to enable them to complete their studies, pursue higher education in Kenya or abroad and become leaders in society. “As a feminist researcher, I wrote my doctoral thesis on the poor access of African women to decision-making positions. It was there that I realized that leadership is not accidental. Rather, it must be fed with intention and purpose, “she said on the organization’s website.

Wanjiru founded and led her organization, « Akili Dada », for nine years, before she was appointed director of the African Women in Agricultural Research and Development (AWARD) in March 2014. The institution, which is located in the World agroforestry centre in Nairobi, invests, in particular in African women agronomists, research institutes and agrifood companies. As a career development program, AWARD has been awarding scholarships to the best women agronomists in Africa since 2008 to strengthen their scientific and leadership skills. The institution builds a network of women who can hold leadership positions in agricultural research and development institutions. Nearly 1,000 scientists have benefited from the AWARD partnership. In 2017, the organization under her leadership launched the “One Planet” scholarship program. The initiative consists of investing $ 15 million over 5 years in the careers of 600 scientists whose research work aims to help small African farmers to adapt to climate change.

Thanks to her commitment to female leadership, Obama administration honored her as a White House Champion of change in 2012.