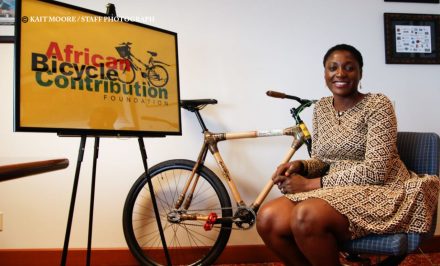 In the streets of Kumasi or Accra in Ghana, new types of bikes are gaining ground. They are made from bamboo. Light, eco-friendly, more resistant, they are manufactured and sold by Bernice Dapaah since 2008. The young Ghanaian entrepreneur promotes bamboo, a local plant deemed very resistant, by using it to make bikes. Her goal is to produce stronger bicycles suitable for the unpaved roads of Ghana and to help students get to school faster.

Bamboo-based bikes is the innovative idea that Bernice Dapaah developed in Ghana. Her initiative was inspired from her difficult experience to go to school in her childhood and her desire to value local materials from Ghana. She was born and raised in a poor family in Kumasi, the second largest city in Ghana. Very young, the little schoolgirl had to travel 3 hours a day to join her school. “Sometimes, I arrived late and I was punished,” she told Ecofin Agence. After years of difficulties, her grandfather bought her a bicycle to get to school more easily. But her bike had to carry her as well as her siblings. “Sometimes the bike broke and we should fix it,” she told Ecofin. After high school, she unfortunately could not go to university due to the lack of means. During this time, she volunteered in several organizations. It was there that she discovered the possibility to make bikes out of bamboo. Given the growing unemployment in Ghana, she decided to embark on entrepreneurship and wanted to exploit local materials. Undoubtedly, she chose the bamboo as her raw material since the country is full of wild and unexploited bamboo. In 2008, she embarked with a friend on a bamboo-based bicycle manufacturing project.

An environmental and social initiative

“When we started this initiative, I often thought about when I was younger and had to walk for miles before I got to school. So why not give bikes to students so that they can study and have enough time to read their books, “she told Ecofin. But through her initiative, she also aims to offer alternative means of transport that are more resistant and can allow disadvantaged populations in isolated areas of the country to brave unpaved roads. Through her project, which she sets up in Kumasi, her hometown, she collects bamboo to make bicycle frames. Her bicycles are more resistant, flexible and ecological, since bamboo is a resistant material which rejects 30% more oxygen than other plants. She created a few bikes at the start, which unfortunately did not succeed because of their prototype. She finally designed more interesting models and created different types of bikes, for men, women, mountains, cities, cargo bikes… In 2010, she presented her idea for the first time at Clinton Global Initiative University, an international competition around sustainable projects. The project also participated in the World Economic Forum in 2014. Through the notoriety she acquired, she decided to found “Ghana Bamboo Bikes Initiative” (GBBI) in 2014.

Established in her hometown, the company employs, notably women to pick up bamboo branches. She also donates bikes to students in Kumasi, to get to school quickly and have time to study at home. “For 10 bikes sold, we give one to a student from a poor rural area so that he/she can go to school,” she told French-speaking Belgian Radio and Television (RTBF). Besides its social dimension, the company also contributes to protecting the environment. For each bamboo cut, 10 more are planted by the GBBI team. Since its creation, GBBI has produced 1,000 bikes sold at 100 euros per unit.

After several years away from school due to financial difficulties, Bernice Dapaah began university studies at 30 years old. She obtained a diploma in human resources management in England, a license in Business Administration and a diploma in “Executive education” from Harvard University.

She is also an Ambassador for the World Bamboo Organization in Switzerland.