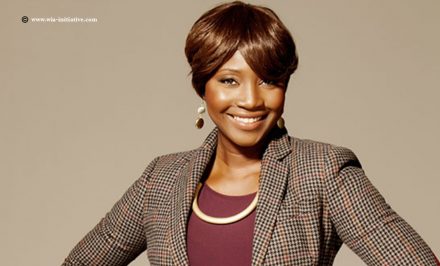 Tiguidanke Camara is the CEO of a mining company in Guinea. She was able to succeed in a domain where she had no expertise. After a career of model in the United States, she decided in 2000 to embark on the extraction of gold and diamonds in Guinea, an area she did not master at all. After several setbacks and failures, her company « Tigui Mining Group » managed to succeed in a male sector with several foreign companies.

It is always with enthusiasm that Tiguidanke Camara recounts her journey in the mining sector, even if her experience was not easy at first. Model for years, she gave up her famous career when she discovered that the great jewelers for whom she worked, plundered the mineral resources in Africa and exploited the local populations. For her, Africans should profit from their mineral resources and this is possible unless these resources are exploited by Africans themselves. « I asked myself whether these friends who had mining companies had an impact on the African community. What could be better than having Africans who take charge of their own future ? This is what pushed me to embark on this domain », she said to TV5 Monde channel.

After exploiting informally, through her mother, a mining plot bought by her parents when she was 22 years old, she decided to explore and exploit the mineral resources formally. In 2008, she acquired 28% of shares in a mining company. But the adventure stopped prematurely. Since she did not have the same vision as her partners, she decided to withdraw.

In 2009, she returned to Guinea and chose to embark on her own exploration and mining project, after several years outside her country and without expertise. She created Camara Diamond Trading network and acquired two mining exploration licenses in Guinea. “It is true that I was not new to this field, but when I started, I had no base in this sector. I went around all the mining forums. Whenever I found a resource person, I would not hesitate to ask them for advice. That’s how I got there. So don’t be afraid to get involved in an area that you don’t master. What you need is to educate yourself, “she explained to the channel. Despite the first failures, she finally succeeded in the field and created in 2012, the Tigui Mining Group Holding, which operates licenses in Guinea and Ivory Coast for nearly 40 millions dollars. “No matter which sector you choose, failure is part of success,” she said on RFI radio.

Today, her holding company operates in West Africa, not only in mining (gold and diamonds), but also in agriculture, real estate, infrastructure, aviation, fishing, energy and trade. In addition to mining, the company has launched a program to promote local entrepreneurship in the different communities in which it operates. It also creates cooperatives, especially agricultural ones for the benefit of local residents and offers them training on food security, with a particular focus on women and children.

Born in Conakry, Guinea, Tiguidanke Camara studied management in Morocco, before flying to the United States where she devoted herself to modeling and the online sale of African natural products.