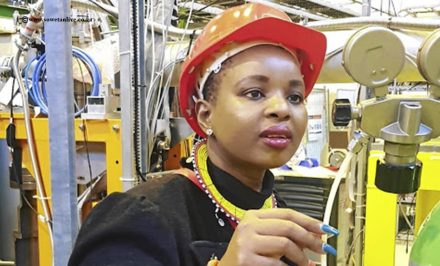 Senamile Masango is a young South African nuclear physicist. She is a graduate in nuclear physics from Cape Town University and member of the board of the Nuclear Energy corporation of South Africa (NECSA). A state organization that promotes research and development in the nuclear energy field.

It was during her first year of high school that Senamile Masango discovered astronomy, space, planets… thanks to her geography course. « I was fascinated and curious to know what was happening in the nine planets of the universe », she told the South African national channel. Therefore, her ambition was to travel to the space.

Passionate about physics, she enrolled in 2004 in the physics and electronics department of Zululand University where she obtained a bachelor’s degree in 2007. After working for five years as a project engineer in the « Lighthouse Finance » firm, she resumed her studies in 2017 and enrolled at the University of Cape Town for a master’s degree in nuclear physics which she got in 2019. In 2017, she was also selected among around fifty candidates to be part of a team of scientists who conducted one of the first African researches within the European organization for nuclear research in Switzerland (CERN).

In charge of Research and Development at NECSA

In January 2020, she was appointed by the minister of mineral resources and energy to the board of the Nuclear Energy Corporation of South Africa (NECSA) for three years. A state organization whose mission is to undertake and promote research in the nuclear field and related technologies in the country. Within the board, she is the chairperson of the research and development subcommittee which is a strategic position, given that South Africa is one of the only African countries to have a nuclear power plant. She also leads a research team representing South Africa at the BRICS Youth energy agency. An international youth volunteer organization whose mission is to promote cooperation among BRICS youth in the energy field.

In 2014, she created the Senamile Masango Foundation with the aim of empowering women in South Africa and throughout Africa. It offers programs to boost the scientific productivity and efficiency of African women scientists and engineers, to support their research efforts and provide them with training opportunities. She also launched in 2015 Women in Science and Engineering in Africa (WISE Africa). An organization that offers leadership and role models for pupils and students desiring to embark on the fields of science and technology. It also provides middle and high school students with programs to prepare them for the academic world.

In addition to her functions at NECSA, Senamile Masango is currently preparing a doctorate in nuclear physics at the University of the Western Cape and is conducting research at Triumf, Canada’s national laboratory for nuclear and particle physics.